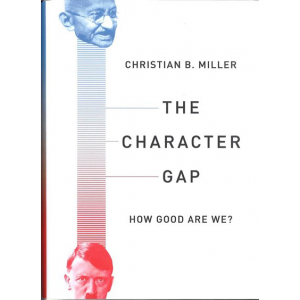 (Excerpted from the recently released, The Character Gap: How Good Are We?)

Sometimes it is easy to get discouraged if, like me, you read a lot of psychological studies about how people behave when faced with moral choices. In some studies we find the majority of participants not helping even with simple tasks. Examples include carrying some papers down a hall, or letting someone know that candy is leaking out of her shopping bag. In other studies, participants do not rise to the challenge when a lot is at stake, such as when a stranger has just had a terrible accident. Is this really the best we can do?

Fortunately we can do much, much better. And we already have the means to do so embedded within our characters. In other words, most of us have a unique capacity to help others in powerful ways, and for genuinely caring reasons. What could such a tremendous capacity be?

Imagine you are in college. One of your professors interrupts the class to announce some recent news about a fellow student named Katie Banks. The professor is about to play a radio interview, but before he turns the player on, he gives everyone these instructions:

Try to focus on the technical aspects. Try to assess the effectiveness of the techniques and devices used to make the broadcast have an impact on the listener.[1]

Then you hear the interview with Katie. Her story is awful. Katie’s parents and a sister have been killed in an automobile crash. There is no life insurance. Katie has a younger brother and sister who she now has to support on her own. She needs help to finish her last year of college. Otherwise she will have to give her siblings up for adoption.

Fortunately, your professor is trying to help Katie out. He gives you an envelope with a letter from Katie. In the letter Katie talks about the ways she could use some help such as, “sitting with her younger brother and sister while she attended her night classes, fixing things around the house, providing transportation, making telephone calls, or stuffing envelopes for a fund-raising project.”[2]

What would you do? I have no way of knowing. But the majority of students in a class where this was actually done, decided not to volunteer any of their time:[3]

Keep in mind that this was not a complete stranger or someone living in another country. This was a real student, they were told, who lived right there on campus.

I thought we were supposed to get some encouraging news. Isn’t this more of the same depressing stuff? It is. Now comes the uplifting part. These students were the control group. For a different group of students, the professor changed just two sentences in the instructions. Instead of focusing on the technical aspects, these students were told:

Try to imagine how Katie Banks feels about what has happened and how it has affected her life. Try to feel the full impact of what she has been through and how she feels as a result.[4]

Could a two sentence change make a real difference in behavior? It sure did:[5]

This, to me, is striking. By taking this different perspective and trying to feel what Katie Banks was going through, these students were far more inclined to help, and to invest themselves in helping.

Clearly these instructions tapped into something psychologically powerful in the students. That would be empathy. Empathy is a complex emotion, and both philosophers and psychologists have been trying to understand it for a long time. At least in cases like this one involving Katie Banks, empathy seems to have two main components. First, I try to imagine what Katie is going through, what it would be like to be in her shoes. This is the perspective-taking component. Secondly, I actually feel some of what she is going through. This is the empathetic feeling component. Together, by trying to see things from her perspective and feel something like what she is experiencing, I can be inspired to help. It seems that a number of the students went through this process, whether they realized it completely or not.

The data reported above on volunteering to help Katie Banks is from real students at the University of Kansas. Here is a secret that those students did not know. There was no Katie Banks. She is a fictional creation of the psychologist C. Daniel Batson.

Batson is probably my favorite psychologist working today. For more than 30 years he has found that if people are made to feel empathy, they are more likely to help. Not just a little bit, and not just doing easy tasks. They are also more likely to help with very inconvenient tasks, in a time consuming way. Now here is some good news.

There is even more. Batson is known throughout the field of psychology not just for finding a robust relationship between empathy and helping – other psychologists have done the same thing – but for his explanation of why the two are linked. He calls it the empathy-altruism hypothesis.[6] The key contrast here is between egoism (focused on benefiting yourself) and altruism (focused on benefiting other people for their own sake).

Imagine you are Katie Banks for a moment. Here is a student named Frank from your university who has come to help watch your siblings so you can go to your night classes.

Frank proves to be extremely helpful, always showing up on time and doing a great job with the kids. One day, out of curiosity, you ask Frank why he volunteered to help. He tells you about that day in class when his professor played your interview and told everyone to really imagine what life is like for you and to feel the impact of what you have been through. Then Frank says one of the following:

"So at that moment I decided to sign up so I could look good in front of my classmates."

"So at that moment I decided to sign up so I would not beat myself up with guilt the next day."

"So at that moment I decided to sign up as my resume is looking a bit thin and I need a volunteer activity."

These sound like very different answers, but they all share one thing in common – they are all self-serving. In every one of them, Frank is ultimately concerned about one person, namely Frank. Katie factors into this equation solely as a means to get Frank what he wants.

Now you might expect that most people would answer in one of these ways, at least if they were being honest. What Batson found, over and over again, is that the experimental results were telling him a fundamentally different story. It is a story about altruism, not egoism. It is a story where, if Frank is answering truthfully and knowledgeably, he would say something like:

"So at that moment I decided to sign up so that I could help you out."

"So at that moment I decided to sign up because I was concerned about you."

Period. Not to get some reward for himself or to avoid some punishment. Just to help out Katie, to try to relieve her suffering, to try to make her life better. Frank’s ultimate focus here is on Katie, not on himself. This, in a nutshell, is Batson’s empathy-altruism hypothesis. He has produced many studies in support of it and convinced many philosophers and psychologists alike that it is correct.

Batson acknowledges that we are motivated by self-interest in many cases, including helping others. Just think, for example, of the various reasons why people make donations to charity, such as to get a tax deduction, and how they are often self-serving.

The remarkable story emerging from Batson’s research is that we are not always like this. Most of us have some capacity to feel empathy, which can be strengthened over time. When we see the suffering of other people, we can be led to help them for their sake, and not for our own. This is very encouraging news indeed.

Christian B. Miller is A. C. Reid Professor of Philosophy at Wake Forest University and author or editor of eight books. His most recent, The Character Gap: How Good Are We? has just been released. The material above is an excerpt from pages 67–73, and is reprinted with permission of Oxford University Press.