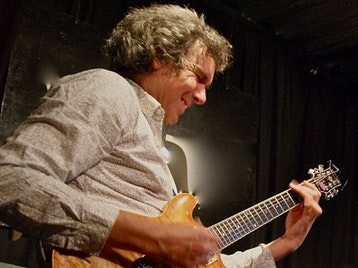 John is an amazing guitarist who started in the late-'60s British blues boom, had his first compositions set to tape with Darryl Way's Wolf in the early '70s, then joined the latter line-ups of jazz-prog legends Soft Machine (replacing Alan Holdsworth) in the late '70s. He's collaborated with luminaries like violinist Stéphane Grappelli, guitar great John Williams, and Andy Summers from The Police, and released eight solo albums prior to teaming up with former members of Soft Machine for another six albums.

We discuss "One Glove" by Soft Machine from Hidden Details

(1994). We conclude by listening to "Blue Breeze" by John Etheridge and Vimala Rowe from Out of the Sky

(2015). Intro/outro from "Huffin'" by Soft Machine from Alive And Well - Recorded In Paris

Here's John live with Stephane Grappelli. Here he is with his trio in 2016. Here he is live with Vimala Rowe. Here he is in a duet with John Williams, and here's a song from his duet album with Andy Summers. Here's that lengthy title track from his first album, "Ash."

Here he is in the 70s with Soft Machine, and here they are as the first reunion line-up John was involved in from 2005.

If you're curious, the first line-ups of Soft Machine didn't even have guitar; here they are live in 1973 (still with the same drummer John Marshall, though), and here they are back in 1967 with frontman/drummer Robert Wyatt.