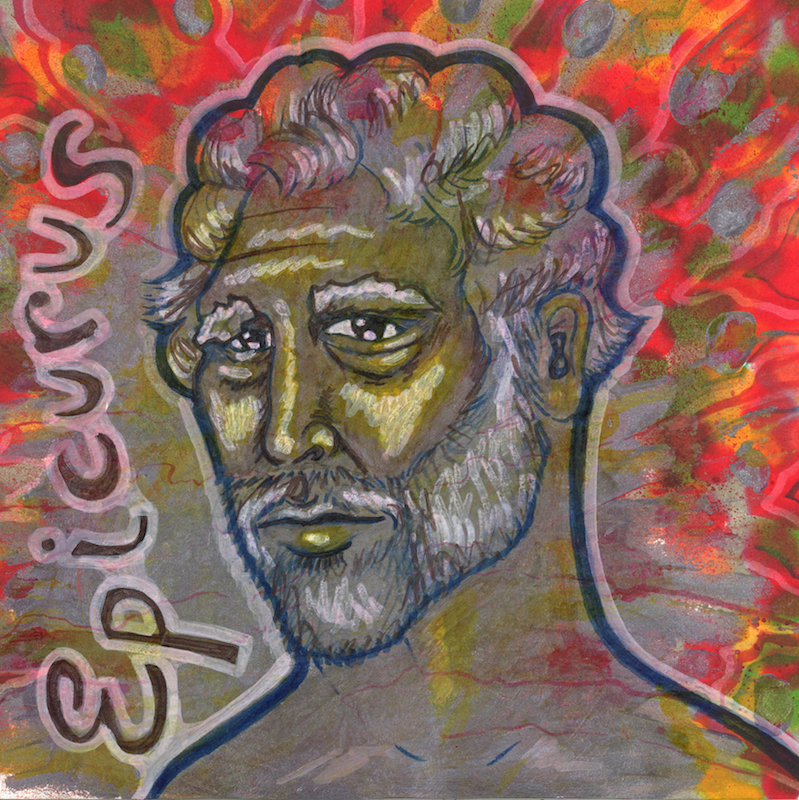 On the extant fragments of Epicurus (341–270 BCE) dealing with ethics, including his "Letter to Menoceus" and collections known as “The Principal Doctrines” and “The Vatican Collection of Epicurean Sayings.”

How are we supposed to act once we understand nature as we outlined in episode 206, i.e., atoms bouncing and swerving around in the void temporarily producing order through fortuitous collisions? There's no room in this picture for gods that tell us what to do, so our values are instead dependent on us, and not on our choice but on our nature.

Epicurus claimed that naturally, people pursue pleasure and avoid pain. This is the only reason we act at all; it is our motive force. But just as in the case of perception, we sometimes lose sight of the immediate data, and we get ideas that things like fame or extravagant wealth will bring us pleasure, when in fact these goals bring with them more pain both in the difficulty of obtaining them and in the end result when they are are obtained. Epicurus was even more down on sex than his follower Lucretius; this obvious pleasure brings with it too many difficulties to make it worth pursuing.

This view presents obvious difficulties. First, how do we really know what behavior is "natural"? Epicurus points us to the behavior of animals and babies. They don't pursue socially engendered desires. However, they're not known for delayed gratification either, because they don't have reason like adults. Once you admit that reason is needed to wisely choose among potential pleasures, then there's room for a difference of opinion in exactly what is "natural" for an adult. One Epicurean can wholly shun social status, while another can claim that attaining a certain level of status is the only way to ensure security.

Second, what is "pleasure?" Epicurus thought that physical pleasures and pains are the basic, and that mental pleasures and pains are always referential to physical ones. Worries about death and loss are ultimately, on this view, worries about a physically painful experience. But does this view capture his support for friendship as a key good? First and foremost, he says, we need friends as a mutual support network; they can help us when times are bad. But we also simply enjoy their conversation, i.e.. the content of their ideas, and that doesn't sound very physical. Again, Epicurus prescribes a strict regimen whereby things like the love of philosophy and artistic endeavors shouldn't be pursued for their own sake, but only insofar as they help us achieve peace of mind. But once you allow that pleasures need not be physical, you're open to claims that things like philosophical curiosity or artistic enjoyment are basic pleasures.

Deciding that there can't be gods to boss us around might sound like is takes the pressure off: We can live how we want. But Epicurus thought that our wants are fundamentally distorted by social values, so serious interventions are needed to help us rediscover our "natural" selves, to see the wisdom of a quiet life free from vain exertions, and so he started The Garden, which was basically a cult to totally immerse people in his teachings and overcome any "irrational" attachments that members might have to their "vain" desires. Despite the supposed connection between this way of life and a proper scientific understanding of the physical world, they were not known as good scientists (as the Aristotelians were), because beyond the point of understanding Epicurus's conclusions and so attaining peace of mind (ataraxia) scientific pursuits are vain. Likewise, they learned philosophy solely to defend Epicureanism against conflicting views, not to really understand those other views and try to objectively weigh their merits.

Of course, we observed with Stoicism that older thinkers like Epictetus had similarly strict views that were reinterpreted even in ancient times to allow various ways of life, but Epicurean views were systematically wiped out by the Catholic Church in a way that Stoic views were not, so the long historical tradition running up to the present day that Stoicism enjoys was cut short in the case of Epicureanism, leaving it much more to our imaginations and judgment as to what a contemporary Epicureanism should be like.

Mark, Wes, and Dylan try to sort through these and other issues using a couple of good secondary sources: Tim O’Keefe’s Epicureanism

(2010) and Martha Nussabum’s The Therapy of Desire

(1994). The primary readings are all in The Epicurus Reader

, which also includes characterizations of Epicurean views by Cicero, Plutarch, and others.