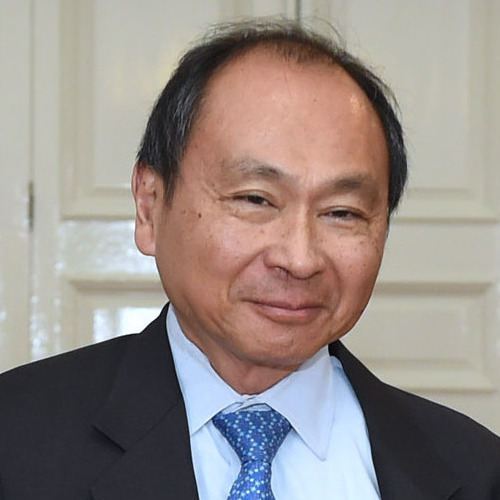 We interview Francis Fukuyama about his 2018 book Identity: The Demand for Dignity and the Politics of Resentment.

What motivates people? Economists point to desire, and to rationality as a way of efficiently getting what we desire. Frank says this misses out on the third aspect of the soul that Plato identified in the Republic: thymos, or spiritedness. Our thymos makes us demand dignity, often in preference to having material desires fulfilled; a lot of the "irrational" behavior that economists and political scientists find hard to explain is a result of this quest for social recognition.

In Part III of Frank's breakthrough book The End of History and The Last Man (1992), he explained the philosophical history of thymos and defined the end of history (i.e., the thing that political history has been aiming at) as the achievement of isothymia, i.e., everyone receiving the recognition that is their due, and so everyone having in that sense the same social status. A liberal democracy, even if it has de facto economic classes, grants everyone the same status under the law, and culturally, we do not (or are not supposed to) think that differences in observable characteristics like wealth, education, ethnic background, or behavioral patterns add up to one class of people being "better" than another.

The new book applies this theory to our modern political situation, where the demand for identification is no longer just a matter of recognizing the individual as a dignified individual, but recognizing the individual as a member of a group that is itself worthy of esteem. Many Muslims worldwide feel that Islam has been under attack. People of African descent in previously colonized and/or slave-holding lands point to historical injustices and lingering white privilege. Rural Americans may feel left behind by progress and disrespected by media elites. Minorities often want to hold on to their cultures instead of assimilating.

Identity gives an intellectual history of this demand and discusses the tendency for isothymia (again, the demand for equal respect) to slide into megalothymia (the demand to be recognized as superior). He points to Luther and the Protestant Reformation as for the first time spreading among the masses the idea that their inside—their thoughts, feelings, and beliefs—is the seat of what matters. He then describes Rousseau as secularizing that notion: that it's not our equality before God that matters, but that we must demand that society recognize each one of us as a full, dignified individual. In both of these cases, what made the individual worthy of respect (in a way that an animal, for instance, is not) was his or her ability to act as a free moral agent, but in the twentieth century, "self-esteem" movements removed this requirement: We are all special, whatever our characteristics.

However, Frank points to a tension between this unconditional regard for every individual and actually having values. He was a student of Allan Bloom and shares Bloom's apprehension about Nietzsche and the threat of moral relativism to social cohesion. In order to have a functioning democracy, both of these thinkers claim, we need to have a social ethic that promotes democratic ideals. So an individual with cultural roots that involve an antidemocratic ideology should therefore be persuaded, if possible, to assimilate to the extent required to promote this shared commitment to democratic equality. Also, the democratic ethic itself cannot decay into mere respect for pluralism; more positive social connections are needed for democracy to function well. Things don't work if each group is siloed, with their news filtered to represent only the opinions of their group, demonizing other groups, fixated on their personal grievances (the past or present infringements of their group's dignity).

Frank's solution is that we need to channel this psychological need to identify with groups to promote civic participation: Our identities should be creedal instead of ethnic (more of an issue in Europe, where "being a Norwegian" seems to rule out folks of different ethnic backgrounds than "being an American"). We need to recognize and address the legitimate issues of past group discrimination but always look forward to ways to politically and culturally unify instead of getting lost in past resentments. (Note that this is coming from a guy with relatives who were held in internment camps during WWII.) We need to guard against megalothymia both where individual leaders want to be recognized as superior and where groups want to assert their superiority over other groups.

Mark, Seth, Wes, and Dylan engage Frank on these issues, and in part two, we continue delving into the philosophy involved on our own. Get the unbroken, ad-free Citizen Edition.

, and you should probably also buy The End of History and the Last Man

, as that book is much more thorough and philosophical. You may also want to hear Frank on the Stanford podcast Entitled Opinions.