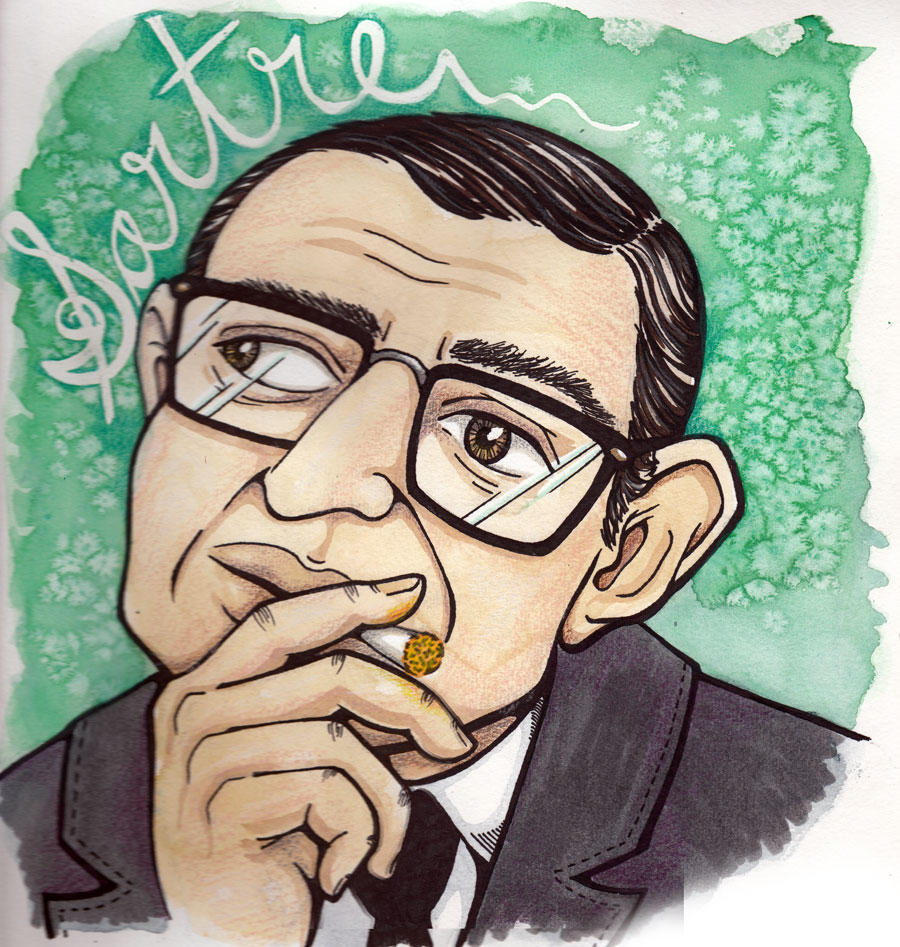 We've finished with poetry and moved on to prose, completing chapter 1 where Sartre expresses how literature is not primarily about style, how it has to actually say something, and so of course it should be political, or philosophical, or otherwise important, and we readers of "great books" should take these arguments seriously (if if we can't because they're not relevant to our era, then we should stop glorifying "dead lions" and instead turn more to modern authors that we can take seriously) instead of looking for a timeless and ultimately empty "message" in the text.

Chapter two ("Why Write?") continues the treatment of prose, giving a fascinating phenomenology of writing and reading. If you're a writer, your work never appears as a finished, transcendent object. When you look at it (unless a long time has passed), you re-enter the writing process, so you recall where passages came from, and everything looks like you could just reach out and change it further. For a reader, a work appears as finished, transcendent, an object in the world, but also incomplete, and waiting for the reader to come along and flesh it out. For a bunch of words on a page to become a coherent work, a person needs to connect the various statements into a sensible narrative. If the book is depicting emotional content, it's the reader's emotional experience that makes that content come to life: The reader's cognitive and emotional limitations will limit the power of what can come out of the work. So reading is a synthesis of perception on the one hand, but also creation, albeit directed by the author. This idea fleshes out the role of the reader as we considered when we read Barthes ("The Death of the Author") and Foucault ("What Is an Author?") back in episode 189.

Sartre turns this picture of the cooperative relationship between the writer and reader into an ethical one. A work of prose presents itself as an appeal: "Please finish creating me by reading with your whole soul." It is an appeal to the reader's freedom, because of course the reader can at any time throw down the book, must voluntarily suspend disbelief where the conventions of the genre require, and more generally, on Sartre's conception, interpretation is what freedom is primarily about. Sartre agrees with Kant insofar as the book should not be heavy-handed to the point of emotional manipulation: it should not tell you exactly what to feel, and should not try to force moral conclusions on you. Prose is, again, primarily about revealing something, and so presents this ethical challenge to the reader to hear what's being said and recognize its truth. So prose is necessarily political. One implication of this view is that a good work can't be fundamentally false or evil: You can't write a good work preaching an anti-Semitic message, for instance, for exactly the reasons described in our last episode: the anti-Semitic attitude, by denying the freedom of all concerned, is fundamentally dishonest and false, so you can't use prose to effectively reveal its truth.

So is the act of reading truly creative as Sartre describes? Will different readers create different works out of the same writing? Or is it more a matter that different readers will more or less be able to appreciate the writer's singular work? Is Sartre, in casting the challenge of an unread book as an ethical appeal, being over-dramatic? He actually presents an artwork as an "end" (i.e., a purpose lying there to be achieved) comparable to how Kant's ethics treats people as ends. This shows both how Sartre's ethics follows Kant's (acting authentically for Sartre necessarily involves acknowledging the freedom of the Other) and how Sartre differs (Kant absolutely affirms the is-ought distinction, whereas for Sartre, things in our experience constantly make ethical appeals to us), and these truth-revelations made by books provide an example of that, so either the fact (the "is") that is revealed does imply in us an ought, or perhaps a better analysis is facts are inherently value-laden (not, at least in some cases, a pure "is"). So this ends up being a more complicated, interesting, and controversial book than one might expect from a work that appears to be merely addressing criteria for good art.

Start with part one, or get the unbroken, ad-free Citizen Edition. Please support PEL!

End song: "Things I Shouldn't Have Told You" by Sam Phillips, as interviewed on Nakedly Examined Music #90.