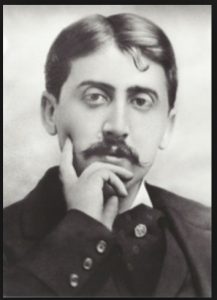 The places that we have known belong now only to the little world of space on which we map them for our own convenience. None of them was ever more than a thin slice, held between the contiguous impressions that composed our life at that time; remembrance of a particular form is but regret for a particular moment; and houses, roads, avenues are as fugitive, alas, as the years.

Beyond the renowned “Madeleine” scene in Swann’s Way by Marcel Proust, we swim within his enchanting prose to learn and expand the most unpredictable senses and worlds within ourselves, and which only Proust is able to bring to life.

Swann’s Way is the first volume of Proust’s mammoth novel, Remembrance of Things Past, which at its core is a study into the experience of involuntary memory.

Told in stream of consciousness manner, Swann’s Way, follows the youth of the narrator in aristocratic France of the late 19th century, taking place largely in the fictional village of Combray, France (based on the real town of Illiers, which changed its name to Illiers-Combray in 1971, in honor of Proust), and is largely focused on what is love, memory, and, lost time.

Through the description and exploration of an older neighbor named Charles Swann, the narrator examines Swann’s tortured romance with a purported “lady of the evening”, Odette.

In his younger days a man dreams of possessing the heart of the woman whom he loves; later, the feeling that he possesses the heart of a woman may be enough to make him fall in love with her.”

Through vivid, comprehensive, sweeping colors and endless stream of consciousness prose which knows no margin, Proust carries us through Freudian, Marxist, philosophical struggles as he scrutinizes Swann, his family, his mother, every object in his room, himself---and the moment when he dips a madeleine cake into his tea, sparking an experience with memory which charges the novel through the constant links between perception and memory.

But, when nothing subsists of an old past, after the death of people, after the destruction of things, alone, frailer but more enduring, more immaterial, more persistent, more faithful, smell and taste still remain for a long time, like souls, remembering, waiting, hoping, on the ruin of all the rest, bearing without giving way, on their almost impalpable droplet, the immense edifice of memory.

Join Cezary Baranieckli, Laura Davis, Nathaniel Hanks, Daniel Johnson, and Jennifer Tejada, as we spend a very long episode deconstructing and being reshaped by our reading of this unspeakably remarkable novel.

If you have thoughts, recommendations, or questions that you want to send our way, please do via phificpodcast@gmail.com.
Hear more Phi Fic.
Thanks to Allan Bowley for audio assistance.
Thanks to Christopher Nolen for the music.