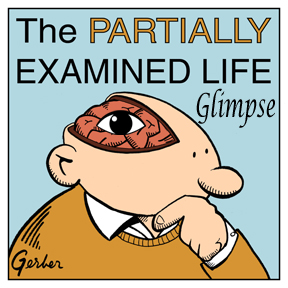 So PEL episodes are swell and all, but are quite long, and if you send them to your friends, they might just shrug and say they have no idea what's going on, and maybe you say "well, you just have to go listen from episode 1 and maybe do some web searching whenever anyone brings up a term you don't understand" and maybe they shake their heads at what a loser you are who would take the time to do such things.

This is to say that the appeal of PEL is as we well know, selective. But yet we at the ever industrious PARTIALLY EXAMINED LIFE LLC want to conquer the world and be known to and loved by one and all, and so we have long schemed about spin-off efforts that should SURELY have more widespread potential appeal than lengthy and involved textual debates about the meaning of "is" and whether the concept of number is empirical and how to best translate logos. Maybe people will want to hear more about music! Maybe they'll want to hear about science fiction! Or movies more generally? Wes wants to start a politics podcast (maybe that'll happen, but it will likely not involve the rest of us).

Well, one idea we've returned to time and again is a shorter-form philosophy podcast, and I think we've hit on a good version of this here with A GLIMPSE INTO PHILOSOPHY, but we want your feedback to make sure this is actually accomplishing what it aims to. Below you'll find three 8–9 minute recordings I made that each rooted in a figure and concept that PEL has covered, but are meant to be easily understood independent of those conversations; I point listeners at the end back to the PEL episode(s) to learn more. Unlike the precognitions we tried recording for a while, these clips are not meant to comprehensively introduce the reading, and include almost no basic, wikipedia-type information. I ask a question relating to the real world, I claim that the figure in question has something to say about it, and then I lay out some twists and turns that hopefully expose a little interesting nuance while "keeping it real."

So take a listen and give some feedback here. Are these clear? Interesting? Maybe play one of them to a friend who doesn't like philosophy so much or would find PEL overwhelming. While these probably all supplement pretty well the PEL eps in question, we're picture that this be its own podcast, on its own feed (would you want to also have them right there in the PEL feed?), spread out onto other publications (the first one is already up on openculture.com), luring folks to the deeper waters of philosophy.

Note the logo at the top of this post is NOT what we'd be using; it's just something I slapped together that I find hilariously awful.

Here's the first one I recorded, on our recent Sartre ep:

Here's the second one, on our current Nietzsche ep:

And finally, here's one on an older PEL episode. These take a bit more effort to get back in the spirit of a previous discussion, but would constitute at least half the output of this new podcast.

Whether this would end up as a Mark solo endeavor or if I can get Wes and Seth and Dylan to record their own episodes remain to be seen; I'm definitely bugging them to do so, as I'd prefer this be more continuous in that respect to PEL, and we also haven't ruled out having more than one of us on an episode.

Also, just to clarify/emphasize, none of this would replace PEL conversations; it would be a parallel effort to run alongside and also leverage our past conversations, to hopefully bring those to a wider audience. Plus, people have at some points criticized us for not expressing our OWN views in the PEL discussions enough, and I think this project responds to that critique.

So speak up, and don't spare my feelings; feel free to comment on this blog post or email me at mark@partiallyexaminedlife.com.