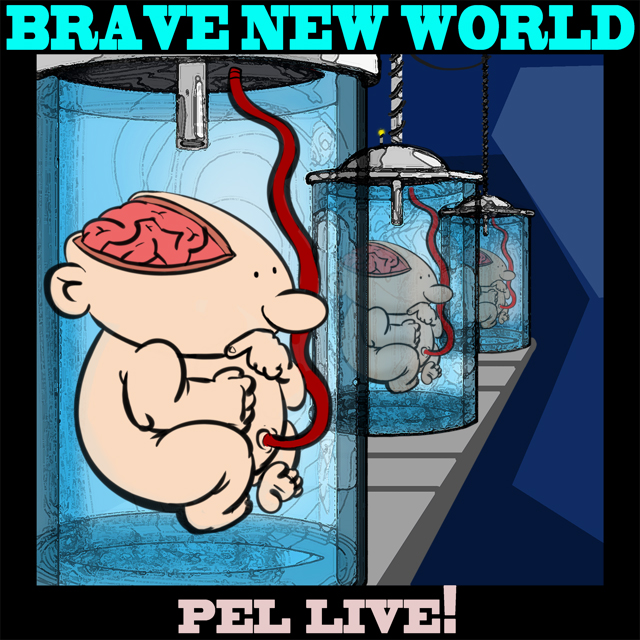 On Aldous Huxley’s 1932 dystopian novel, recorded on stage with an audience Q&A at Manhattan's Caveat on 4/6/19.

If we harness the power of society to employ available technologies to really focus on making people happy, what would the result be? This is Huxley's thought experiment, drawing on the latest thinking (and a bit of sci-fi projection regarding possible future advances) in mass-production techniques (via Henry Ford, whose thought is treated as religion by the society the novel depicts), behaviorist conditioning, education (including sleep learning), embryology (he predicated cloning), eugenics, pharmacology (the drug soma, that has no negative side effects), and psychotherapy (including removal of troublesome parental relations and encouragement of childhood sex play). Some of these ideas had previously been synthesized by Bertrand Russell in The Scientific Outlook (1931, particularly chapter 15), which Huxley liberally borrows from.

So this is a test case for utilitarianism, but like all test cases for big ideas, it's somewhat inconclusive. First, this is apparently a dystopia, but Huxley seems not so sure. While he certainly didn't like the caste system and totalitarianism he depicts and sincerely bemoaned the loss of human autonomy (see this 1958 interview where he predicts that the brave new world is closer than ever given increasing overpopulation and bureaucratization), he also didn't think that simply rejecting all these new technologies and insights was a feasible solution either, because the challenges we face (again, chiefly overpopulation) are real and require our ingenuity and not any kind of return to primitivism.

Second and relatedly, is the idea of making people happy using technology fundamentally faulty, or was it just not implemented in the right way here? As I argue, a utilitarianism like Bentham's focused on pleasure instead of flourishing is impoverished. Making us "happy" isn't just a matter of feeding our pleasure centers, much less killing off the more spiritual parts of us so that pleasure becomes our only possible requirement for happiness. (The Epicureans seemed to think that all this extra "spiritual" worrying was just pretentious anyway, that focusing on physical pleasure and freedom from worry is the only real human good.) If we accept (following Nietzsche) that human fulfillment is too complex to mass produce, does entail instead a hands-off, libertarian attitude where as a society we simply stop trying to make people happy? To me, that seems unduly pessimistic: there are plenty of things we can try to reduce the common causes of unhappiness, even if that's not itself sufficient to guarantee universal happiness.

Mark, Seth, Wes, and Dylan are all here to discuss how Huxley tries to convey his ideas, what roles the various characters in the novel play, whether this is a critique of capitalism or communism (neither!), how this relates to our current social ills, and more. Featuring audience participation by Jesse, Scott, Zoe, Avi, Brenda (Dylan's wife!), Dan (from Phi Fic!), Toby, and two guys at the end that didn't say their names. Thanks to everyone for coming out!

If you'd like to watch this unedited, here's the newly zoomed-in video:

Buy the edition of the book that we read

, which includes a good introduction by John Sutherland, or read the text online or listen to it. Here's Brave New World Revisited, a series of essays about the critique written in 1958. Many of his essays at the time of the original book are also relevant, like "Wanted, A New Pleasure," where he basically came up with the idea for the drug soma.

You should of course also listen to our episode on 1984, and you may enjoy this superbly presented comparison of the two (featuring "debaters" for the current relevance of each book and actors presenting key scenes live on stage). In preparation for this discussion, we all browsed in this 2008 collection edited by David Garrett Izzo: Huxley's Brave New World: Essays

. Here's a good BBC In Our Time discussion of the book. You might enjoy this essay by Margaret Atwood about it. Here's a discussion of an issue we had while reading the book: Does Lenina die at the end? And if you're curious, here are all the sourced Shakespeare quotes used in the book. A really short, simple depiction of this same idea about human happiness involving spirituality and not mere pleasure is "The Good Brahmin," a short story by Voltaire. Seth quotes Neil Postman's book Amusing Ourselves to Death

End song: "Brave New World" by Mark Lint, written prior to this show and recorded on 5/11/19. Read about it.

Get the commemorative T-shirt. If you become a PEL Citizen and find the Citizen version of this episode, you'll hear right at the beginning a coupon code that will get you $10 off. Supporting PEL will enable us to do more live events like this, and it would also help us greatly if you can fire up iTunes and leave a nice review on our store page there.

Thanks for being a PEL listener, and for any love you've given us over the years! We invite you to share your stories about how the podcast has affected your life by contacting us.