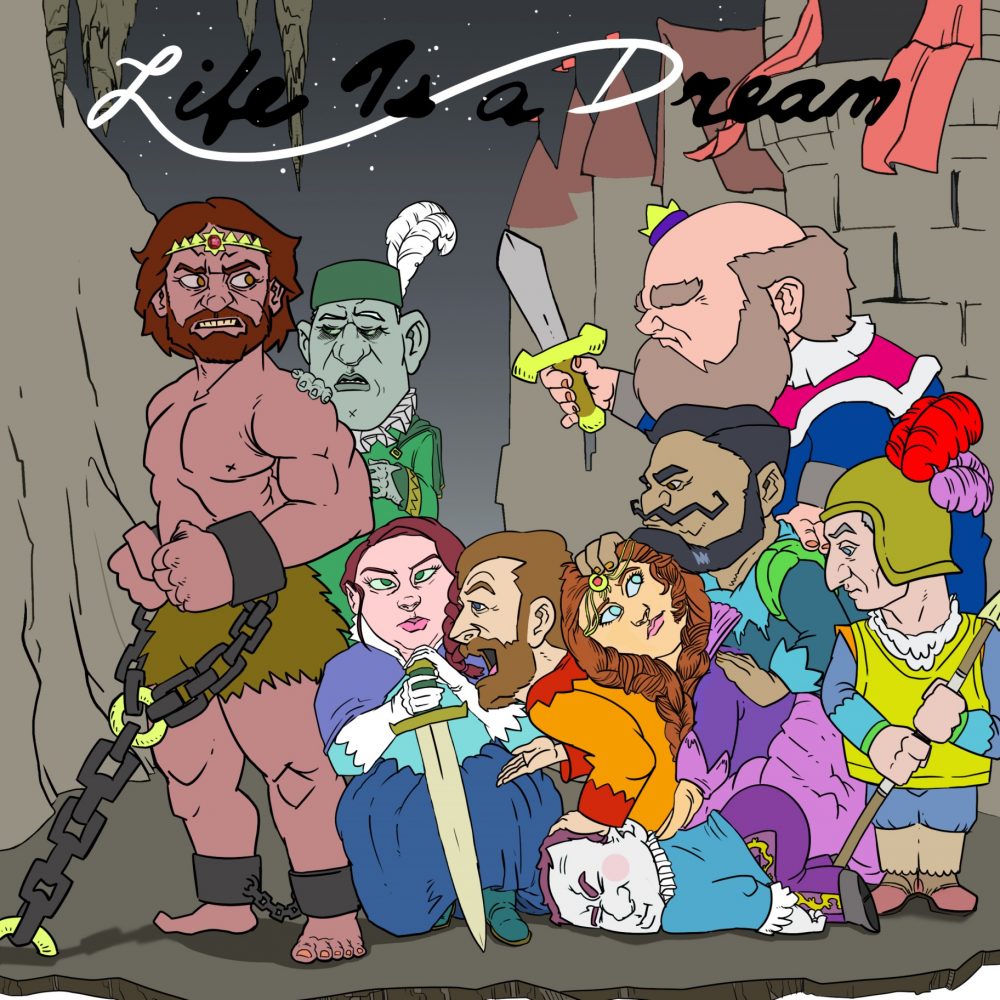 On the 1636 comedy by Pedro Calderón de la Barca, considering destiny (Christian vs. Ancient Greek), skepticism, meta-theater, and the ethic of honor. Listen to our performance first.

We used Stanley Appelbaum's 2002 translation with his introduction.

. Some optional articles we refer to are Sophie Kluge's "Calderón's Anti-Tragic Theater: The Resonance of Plato's Critique of Tragedy in 'La vida es sueño'" (2008), Thomas Austin O'Connor's "Is the Spanish Comedia a Metatheater?" (1975), and Leonie Pawlita's "Dream and Doubt: Skepticism in Shakespeare’s Hamlet and Calderón’s La vida es sueño" (2018).

Mark, Wes, and Dylan are joined by actors Bill Youmans and Erica Spyres to talk through the issues the play raises. We consider the whole notion that "life is a dream" as skepticism. Descartes's famous Meditations were published in 1641, only five years after this. But Descartes just uses skepticism as a methodological step and ultimately rejects it. Montaigne, however, around 1580 had already expressed a skepticism closer to Calderón's: Human reason is conceited and fallible, and will never ground true knowledge, so there's no sense in taking our speculations about the ultimate state of the world too seriously. And there's no threat in this attitude to falling into existential despair if we just fall back on common sense, on what we all (i.e., they all in this historical period) really know about our place in the world, i.e., we should just have faith in God and traditional religion. To borrow a quote from Game of Thrones (which we do bring up for comparison a bit here), "it is known."

This is a very practical point of view, centered on ethics, and within that realm Calderón isn't just spouting dogma, but is critical of our (their) not-entirely-consistent storehouse of ethical doctrines. Much of the play is a meditation on honor, with Rosaura wanting to kill Astolfo for violating her honor, and Calderón both respects this moral consideration yet ultimately does not give it reign, and in fact makes fun of honor's seeming conundrums (e.g., if I do you a favor, I put you in my debt, and thereby hurt you whenever I help you).

Still, considerations that determine right and honorable action are for the most part pretty evident when you think about them, according to Calderón. King Basilio, as a father, had the duty to raise his son with diligence and care, but he was foolish and let his pretensions to scientific knowledge override his common sense: He delved into astrology ("subtle mathematics") and thought he had reason to fear his son, and so locked him in a tower to be raised, thereby actually fulfilling the prophecy.

Segismundo the son was on the one hand raised with Christian doctrine (by his jailer Clotaldo) but on the other hand considers himself educated by nature itself, chained up in the wilderness with only animals and the sky for company much of the time. When he is informed of his true heritage and put in a position of power, he immediately abuses it. Yet he's very soon transformed: When he's locked back up and told that it was just a dream, he sees that 1) Power is just an illusion, that disperses as soon as those you have power over stop playing along, 2) Any ambition is really illusion, because it can be taken away from you and doesn't provide the satisfaction it promises even when you achieve it, and 3) Acting virtuously is good for the actor, and is something you actually do have control over, so you should act that way even and especially if life is a dream.

When soldiers come in Act III to free Segismundo, he doesn't just say, "Oh, I guess I was lied to when I was told that Act II was a dream"; instead, in keeping with the above, he thinks that even now, as he's being freed and potentially elevated back into power, that is in a strong sense a dream. This whole attitude very much accords with the Platonic notion that worldly things like power and even physical harm aren't really real, because they involve change. It's only the divine world that's real, and virtue is a turning inward toward that eternal realm. You can see the play as a variation of Plato's allegory of the cave in The Republic: Segismundo starts in a literal cave, surrounded perhaps not by illusions but certainly missing out on a lot of the real things in the world, is released from the cave to see those real things in Act II but to a situation in which his ultimate situation is still illusory, and only on returning to the cave understands truth (is reminded of it by Clotaldo, really, who tells Segismundo that he should be virtuous even in dreams) so that he then can then become the Platonic philosopher-king that his father failed to be.

This whole father-fate scenario should remind us of Sophocles's Oedipus, where a prophecy that Oedipus would kill his father and marry his mother causes him to be sent away at birth, which in turn eventually enables that prophecy to be fulfilled (Oedipus wouldn't have done those things if he recognized his parents). But this is a comedy, and in accordance with Plato's critique of drama (also in the Republic), Calderón seems to be critiquing the Oedipal view of fate as slander against God. It's not the case that good people are fated to horrible ends despite their best efforts; it's not that our characters are fixed, with a tragic flaw that will inevitably lead to our downfall. Yes, God is all-knowing, so it's hard not to admit into that world-view the idea that he knows what you're going to do, i.e., you in that sense have a destiny. But you still have free will; you can change, and if you do the right thing, you'll likely do well.

The play doesn't deal with the problem of evil that these thoughts naturally raise; it just warns us against screwing things up by overthinking them in the sense of taking actions specifically to avoid what you take to be your destiny.

Much of the second half of our discussion focuses on the idea of "meta-theater," which is where a dramatic work shows off its nature to the audience as dramatic work. This is also related to Plato's critique of drama: That it's escapist, that it fools us into believing in the figments it presents, which can involve morally undesirable messages as in the view of the gods in Oedipus. Drama that shows its own artifice allows the viewer to retain a certain distance from it: It allows you to think for yourself and not take the presented views as reality (see Sartre on literary manipulation).

There are many ways to do this, and it's very common in modern theater where the ability to break the fourth wall and talk directly to the audience provides a key advantage that live theater has over mass media. The classic example is a play within a play (as in Hamlet, which is of course a tragedy and subject to Plato's critique, so let's just say that meta-theater can be used for this critique but doesn't necessarily imply it), and the idea that "all the world's a stage." (Read on Wikipedia re. the full Shakespeare quote about that as well as its origins in Erasmus and elsewhere.) So, how does that sentiment compare to Segismundo's pronouncement that life is a dream? Both involve life's activities being in some sense illusory, not having the import or ultimate context that we take them to have. Life's being a stage and not just a dream also adds the element of a potential audience, which for Calderón (and probably not for Shakespeare) would be God. Living in a religious culture for thousands of years has given many of us—even those who no longer believe in God—the habit of acting as if in front of this audience, of taking the contents of our minds seriously, as of objective and not merely a matter of personal whim. Whenever we think that it's motive and not results that matter in ethics, whenever we try à la Nietzsche to live life as an art, whenever we create art for art's sake, we're imbuing an experience that could be nihilistic with some intrinsic value, as if it were happening on a stage in front of an omnipotent judge.

Finally, at the end of the discussion here, you get to hear a bit about the rest of the cast and what Bill and Erica are up to professionally. Note that that part of the discussion is a bit longer on the Citizen Edition of this episode, which is also ad-free. Becoming a Citizen (or $5 Patreon supporter) will also get you access to the entirety of Wes and Bill's (sub)Text recording on Shakespeare's Tempest. Please support PEL!

Please fill out our bonus material survey at partiallyexaminedlife.com/bonus.