I see what is right and appr 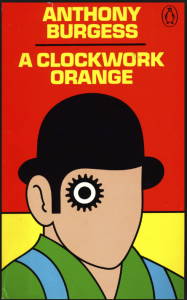 ove, but I do what is wrong.

In this episode we are discussing “A Clockwork Orange” by Anthony Burgess. As many of us know from the infamous 1962 book and the 1971 Stanley Kubrick film based on it, the story takes place in a dystopian futuristic Britain. It tracks the dark, torturous, amoral acts performed by our hero--or anti-hero—Alex, and his gang of teenage thugs a.k.a. “droogs”. The novel, written partially in a distorted Russian-speak called “Nasdat", follows Alex, as he is eventually sent to prison for the murder of an elderly woman, then is subjected to a Government-enforced rehabilitation technique called “The Ludovico Technique.” This process forces Alex to watch grotesquely brutal films while being injected with nausea-inducing drugs intended to make him extremely ill at the thought of violence. The State is programming Alex to be incapable of crime or evil.

What is happening to you now is what should happen to any healthy human organism contemplating the actions of the forces of evil, the workings of the principle of destruction. You are being made sane, you are being made healthy.

Join us as we debate the central conflict wrapped around the issues of Good and Evil in this book: Jennifer questions whether humanity exists as merely Hobbes’ “Nasty, Brutish and Short,” or as Rousseau’s “Noble Savage”, while Nathan astutely points out the key difference of “having the drive to perform vs. having the potential of executing a fate." Cezary wonders “What do we think about the defenders of liberty here”, and Daniel concludes, “Let’s all agree we’re going to have evil in us, and the potential for good” while Laura asks “Isn’t it more vital that we have the ability to choose than that we eliminate evil?

Check out this discussion on the difference between the book and the movie.

Join Cezary Baranieckli, Laura Davis, Nathaniel Hanks, Daniel Johnson, and Jennifer Tejada, as we all struggle with what is defined as truly "evil".