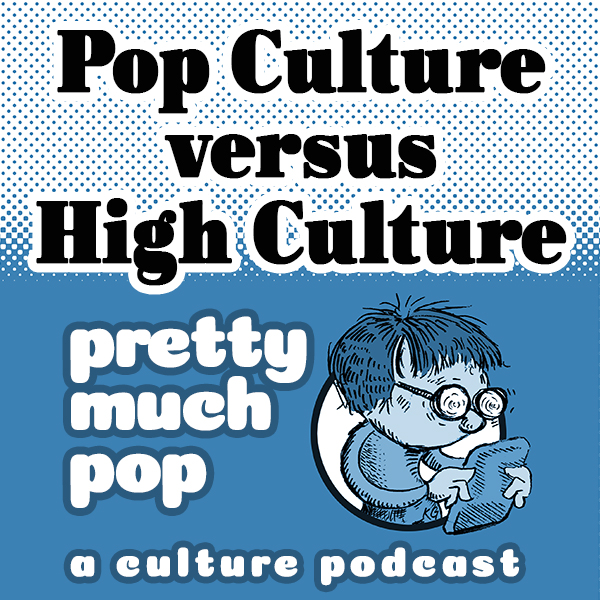 What is pop culture? Does it make sense to distinguish it from high culture, or can something be both?

Your PEL host Mark Linsenmayer is joined by actor/musician Erica Spyres (a recent PEL guest), and sci-fi writer/linguist Brian Hirt (of the Constellary Tales podcast) in this first attempt at a conversation together for this new podcast that will cover films, TV, novels, games, music, comedy, theater, and more. This one features a special appearance by our editor Tyler Hislop (a prolific rapper who's appeared on Nakedly Examined Music.

We touch on opera, The Beatles, Fortnite, 50 Shades of Grey, reality TV, and more.

Some of the articles we bring up in our discussion are:

Read more about the 1895 silent film that featured a train coming right out of the screen, sending people screaming in terror. Here's more about the opening of Stravinsky's "Rite of Spring" at which spectators rioted.

Related PEL episodes: 137 on Pierre Bourdieu about the tastes of social classes, and 193 on liberal education and the idea of a "canon" of essential, high-culture works.

The opening music is by Mark (guitars, cellos, djembe) and Erica (violins). Our logo is by Ken Gerber (Brian's brother, who did the PEL and NEM logos), with episode-specific customization by Brian.

The ending song was written by Mark just for this episode. It's called "High Rollin' Cult," and features Erica on violin and harmonies.

For more, visit prettymuchpop.com. Subscribe on Apple Podcasts, Android, Stitcher, or just add our RSS feed to your favorite player. Maybe you could leave us a rating/review?

To hear episodes of this podcast ahead of everyone else, plus bonus content for every episode, go support us at patreon.com/prettymuchpop. Follow the new podcast on Facebook.