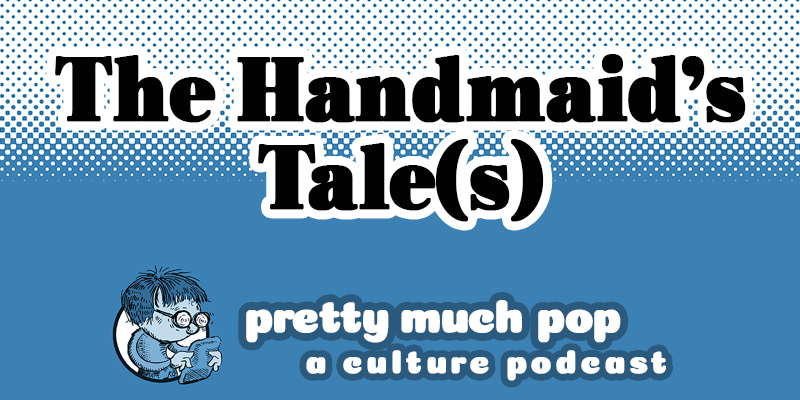 Mark, Erica, and Brian take on both Margaret Atwood's 1985 novel plus the Bruce Miller/Hulu TV series through season 3. There's also a graphic novel and the 1990 film.

We get into what's needed to move a novel to the screen like that: The character can't just remain passive as in the novel in order to keep us suffering with her past the first season as storytelling beyond the book begins. We talk about Atwood's funny neologisms (like "prayvaganza") that didn't make it into the show.

How does race play into the story, and how should it? Is the story primarily a political statement or a self-contained work of art? Given the bleakness of the situation depicted, can there be comic relief? How can we have a nominally funny podcast about this work?

Some of the articles we drew on or bring up include:

Plus Erica brings up this video of Bill Moyers interviewing Atwood about religion. We also touch on Shindler's List, Jean-Paul Sartre's Nausea, David Brin dissing Star Wars as anti-democratic storytelling, and the many conservative dismissals of the show as hysterical propaganda.

Buy the book, the graphic novel, or its new sequel The Testaments.

You may be interested in these related Partially Examined Life episodes: #181 on Hannah Arendt and the banality of evil, #139 on bell hooks  and her historical account of conditions for black women not terribly dissimilar to the ones described by Atwood, #90 interviewing David Brin about the connections between speculative fiction, philosophy, and political speech. PEL has also recorded several episodes on Sartre and Mark ran a supporter-only  session that you could listen to on Nausea in particular. Also check out Brian's Contellary Tales podcast #2 talking about another breeding-related sci-fi story by Octavia Butler.

This episode includes bonus discussion that you can only hear by supporting the podcast at patreon.com/prettymuchpop.

This podcast is curated by openculture.com.