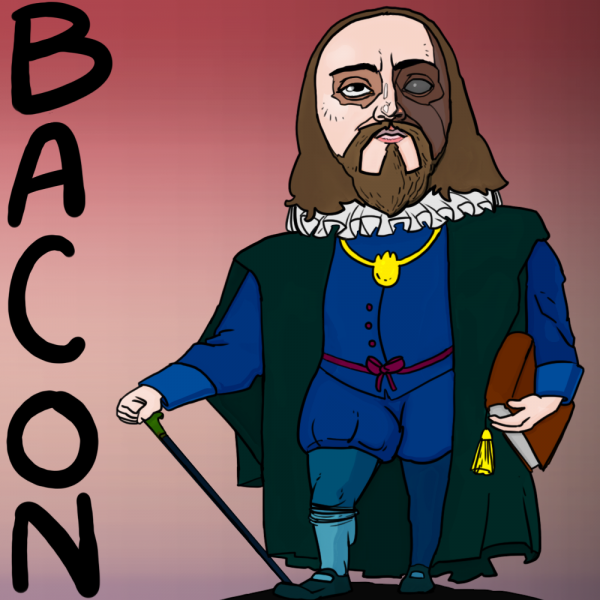 An "organon" is a toolset, and Bacon claims to have developed a new toolset that will open up nature to inquiry in a way that wasn't possible for ancient and modern natural philosophy. Mark, Wes, and Dylan consider the degree to which what Bacon describes actually corresponds to the scientific method as we would recognize it, talk through Bacon's "four idols" that interfere with impartial inquiry, and consider how Bacon's method fits in with his larger political-ethical-religious view of "instauration," whereby we gain mastery over nature, recovering from the God's curse when he kicked Man out of the garden of Eden for eating the fruit of knowledge.

Some current conflicts between science and philosophy are on display here: Bacon does believe (à la "scientism") that the scientific method applies to all subjects including human affairs, even as he does make a (merely nominal?) distinction between the realms appropriate for science and for religion. He criticizes other thinkers for jumping from a single inquiry to some kind of global theory (as when now economists see everything in terms of economics, or Freudians interpret all behavior according to that falsifiable theory). Also, Bacon's four idols may describe removable obstacles to correct use of his method, or they may well anticipate historicist/post-modern critiques of science by describing science as always performed by people with their various idiosyncratic, social, and philosophical biases. Bacon also seems to anticipate Karl Popper by stressing the value of "negative instances," where you rule out a hypothesis.

Interestingly, Bacon doesn't use the term "hypothesis" as much as one would expect. His method instead makes use of a series of tables. When investigating heat, for instance (his example that takes up the beginning of book 2), first write down all instances you can think of of heat, then related cases where heat is not present, cases where the amount of heat varies by some factor or other, then list (based on the previous tables) what you can rule out as the cause of heat, and finally you look at what's left and can give "the first vintage form" of heat, where "form" here retains a term used in the Scholastic (i.e., Aristotelian) science of his day but which in Bacon's new scheme is really getting at the law of nature behind why a thing is what it is.

We read the Joseph Devey translation (1902), which you can read online or buy it

You might also be interested in reading about (but probably not actually reading) Bacon's utopian novel New Atlantis.