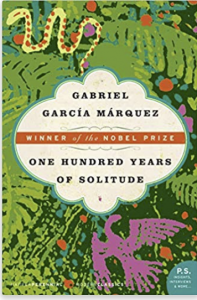 Only then did he discover that Amaranta Úrsula was not his sister but his aunt, and that Sir Francis Drake had attacked Riohacha only so that they could seek each other through the most intricate labyrinths of blood until they would engender the mythological animal that was to bring the line to an end. Macondo was already a fearful whirlwind of dust and rubble being spun about by the wrath of the biblical hurricane when Aureliano skipped eleven pages so as not to lose time with facts he knew only too well, and he began to decipher the instant that he was living, deciphering it as he lived it, prophesying himself in the act of deciphering the last page of the parchments, as if he were looking into a speaking mirror.

Join us as we continue our study of Gabriel Garcia Marquez’ epic, One Hundred Years of Solitude. In this Part 2 episode, we look at moments which we didn’t have a chance to discuss in Part 1, namely, the “insomnia plague,” the “four year rain,” the “Civil War” the fate of the character Rebecca and the matriarch Ursula's, overwhelming fear that a child would be born into the family with a pig's tail—did that happen? We’ll see.

Then he skipped again to anticipate the predictions and ascertain the date and circumstances of his death. Before reaching the final line, however, he had already understood that he would never leave that room, for it was foreseen that the city of mirrors (or mirages) would be wiped out by the wind and exiled from the memory of men at the precise moment when Aureliano Babilonia would finish deciphering the parchments, and that everything written on them was unrepeatable since time immemorial and forever more, because races condemned to one hundred years of solitude did not have a second opportunity on earth.

We also discuss the themes which Nathan, Laura, Jennifer and Daniel each found to be what resonated most: the circularity of time, memory, loss, humanity, and the caution the novel leaves us with about living life.