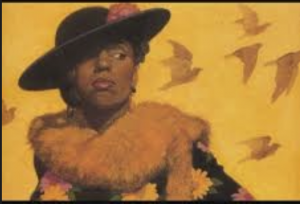 Because each had discovered years before that they were neither white nor male, and that all freedom and triumph was forbidden to them, they had set about creating something else to be.

In this heart wrenching and brilliant novel by Toni Morrison, we are carried through a world called The Bottom:

That was the way it got started. Not the town, of course, but that part of town where the Negroes lived, the part they called the Bottom in spite of the fact that it was up in the hills. Just a nigger joke. The kind white folks tell when the mill closes down and they’re looking for a little comfort somewhere. The kind colored folks tell on themselves when the rain doesn’t come, or comes for weeks, and they’re looking for a little comfort somehow.

We meet a faction of characters from Shadrack, our opening knight in broken armor fighting WWI, who came home to establish National Suicide Day; Eva Peace, grandmother to the title character, Sula, who had one leg because she had placed one under a train to collect the insurance money--to Chicken Little, a young boy who is thrown into a creek by Sula, and drowns.

At the center is Sula, a wandering, self-determined girl, who becomes best friends with another young girl named Nel, and despite their differing backgrounds--Nel comes from a home of “oppressive neatness” and Sula's mother is known as “sooty”—a bond develops between them which is not merely unbreakable, but fueled with oxygen.

In the course of the novel, Sula and Nel encounter the growing pains of sex, family, religion, racism, ambition while trying desperately to know who, in fact they are. But one day, as Sula and Nel are playing in the field near a creek with a young boy name Chicken Little, Sula starts twirling Chicken around in her arms, and ends up tossing him into the creek where he drowns.

Nel and Sula stood some distance away from the grave, the space that had sat between them in the pews had dissolved. They held hands and knew that only the coffin would lie in the earth…They relaxed slowly until during the walk back home their fingers were laced in as gentle a clasp as that of any two young girlfriends trotting up the road on a summer day wondering what happened to butterflies in the winter.

Their friendship forever changes after that day, and as they grow older—they confront even deeper fractures between them. Then one day, many years later, after visiting the grave that held Sula, Nel breaks down and cries:

“We was girls together,” she said as though explaining something. “O Lord, Sula,” she cried, “girl, girl, girlgirlgirl.”

Join Nathan, Laura, Jennifer and Daniel as we breathe deeply and journey through this incredible story, launched by Nathan's insightful first question: How many tears were shed reading this one?

Hear more Phi Fic.
Thanks to Christopher Nolen for the music.