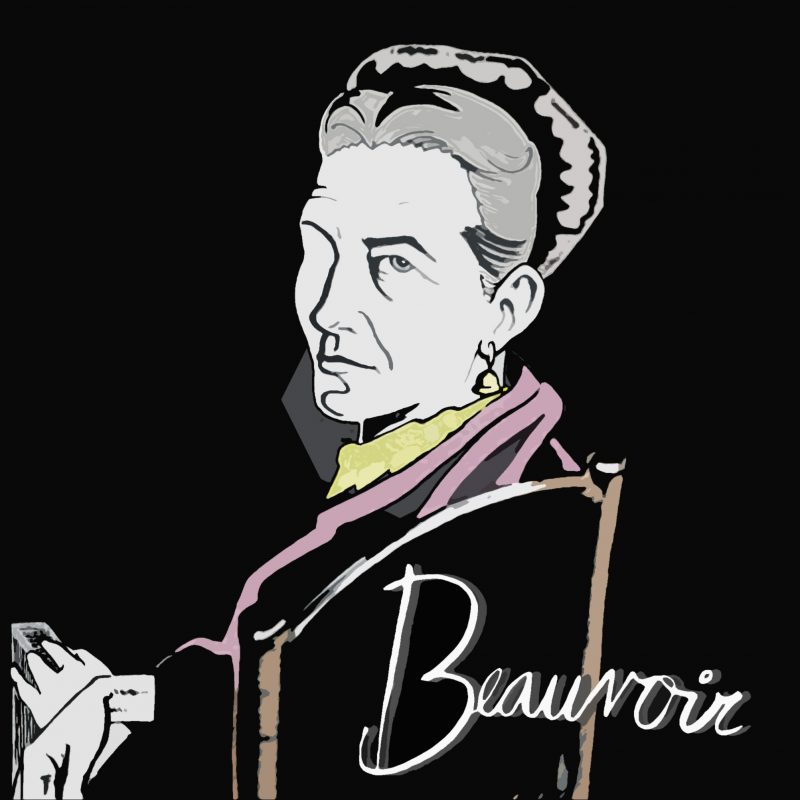 On Simone de Beauvoir’s The Second Sex (1949): "The Woman in Love" and "Myths" with guest Jennifer Hansen.

Our ep. 232 laid out Beauvoir's picture of the Othered Woman, deprived of agency and hence pretty f'ed up. Now we consider the consequences of this situation for romantic love. In "The Woman in Love" (vol. 2, part III, ch. 12), we get a psychological picture of the typically asymmetrical character of romantic relationships (note that "love" in this strong sense is rarer than one might think; many marriages don't involve the intense dynamic she describes): The woman, having no projects of her own, surrenders herself totally, raising her lover to divine status, trying in effect to be a Subject by living through him. The man, on the other hand, however much he may exhibit passion in the chase, once he has her, has other projects to focus on. He doesn't need her as much as she needs him and will find her demands for constant attention intrusive. He also can't live up to being deified, so she'll inevitably end up frustrated and is likely to cheat and exhibit stereotypically shrewish behaviors. Love is a woman's attempt, on Beauvoir's view, to balance her eroticism (orienting herself outward) and her narcissism (orienting inward, trying to maintain a self in the face of patriarchy that tries to crush her): She's willing to undergo the humiliation of self-surrender if only her lover can then give her reality and life through his gaze. This is inherently unstable.

In "Myths" (vol. 1, part III, ch. 1), we find out what men (commonly, under patriarchy) seek from love. Given that they're not virtual slaves, you'd think that they'd be less neurotic, but no, they suffer from more general existential maladies. Consciousness, as Sartre's book Being and Nothingness indicates, is nothingness, since we "are" not anything in particular. So we seek to solidly become something real and stable in the world, and this primarily through the gaze of other people. But per Hegel's master-and-slave picture of human interaction, this is hard to achieve with an equal; our first instinct on meeting another self-consciousness is to fight, to dominate, to get that person's wretched gaze off of us. What we really want is to be seen, to be recognized, but in a positive light. Man wants to be judged, but not really honestly judged; we want to be judged as good. Woman, as a sort-of person, can serve this role.

So why is this chapter called "Myths"? Because men have made religion, because it's men's neuroses and their attitudes towards women that get writ large in cultural archetypes. So if Jordan Peterson says that Man is archetypically order and Woman is archetypically chaos, that's a description of men's fears. Because though woman on the scheme Beauvoir is describing can "complete" man (or so he thinks), she's also fickle, like nature that can give life through bounteous harvests but also tear up those harvests through catastrophic storms. Another aspect of man's attempt at self-hood is that he defines himself as a transcendent freedom, as essentially a Cartesian spirit that can overcome its embodiment to make truly free choices. Now, this should sound like it accurately reflects Sartre's (and so Beauvoir's) existentialist take on the human condition, but patriarchy has made this too literal. Man has identified himself as spiritual in opposition to the fleshy Other, to the Mother from whence he came, to Nature that he thinks he's risen to be apart from. When he muses about what Woman is, he gets a bunch of contradictory images of saint and demon, peace and roaring chaos, nurturing and smothering. These are all largely projections, and this chapter goes into great detail about mythical images of Womanhood, taboos surrounding menstruation and birth, and the kind of origin-rejecting psychology that we discussed in our Kristeva episodes (you might recall we even explicitly connected this to Lovecraftian horror).

We also looked at Beauvoir's chapter "The Lesbian" (vol. 2, part I, ch. 4) to see what Beauvoir thought love might be like among equals. As an existentialist, you know she's going to say that being gay is a choice, since everything about ourselves is a choice, whatever the "situation" of our bodies and desires may be. She thinks that it's not surprising that women should be attracted to each other, since before social norms kick in, it makes sense that everyone should be attracted to everyone else. What's different about the lesbian is that she refuses the situation of submitting herself to men. And yes, since there are no socially dictated roles defining how the lovers in a lesbian relationship are supposed to act toward each other, there's more honesty and ease in such relationships, but she thinks they're not generally as intense and epic as the religiously fraught heterosexual relationships described above, and they're still indirectly polluted by patriarchy and of course subject to existential ailments. Her account is interesting but problematic enough that we didn't discuss it; our purpose in adding it was to prepare us for ep. 235, where Jenny rejoins us to discuss Judith Butler's Gender Trouble, which uses Beauvoir as a primary starting point.

Buy the book or try this version someone posted online.

If we have any trans* philosopher (or podcaster or other representative or commentator of some sort) who might want to contribute feedback in some form to our next episode on Butler's Gender Trouble, please contact Mark.