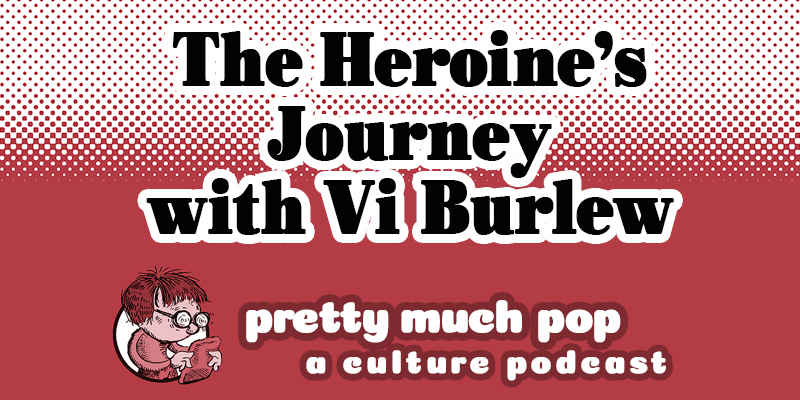 Pretty Much Pop taps in to what today's youth are talking about... or at least what they're writing their term papers on. Our guest Vi Burlew has arisen, a shining figure clad in mail, carrying aloft a shimmering broadsword (...and presumably a trapper keeper; the kids today still use those, right? Damn, we are old.) to bring your hosts Mark, Erica, and Brian this topic about the hero's journey.

This general plot structure dating back to ancient myth was detailed by Joseph Campbell and famously and deliberately plundered to create the plot of the original Star Wars. So how has this evolved with the increasing introduction of female heroes in recent, largely Disney-owned blockbusters? We talk Wonder Woman and Captain Marvel, anticipate Black Widow and the new Mulan, but also bring in Lord of the Rings, Harry Potter, The Wizard of Oz, Little Women, Jane Eyre, Working Girl, and of course Road House.

What complicates this issue is that a distinct "heroine's journey" had already been plotted in response to Campbell by feminist thinkers at least back to Maureen Murdock in 1990. The key difference is that while the hero achieves the goal and comes home in triumph, the heroine then realizes that there was something self-betraying about the triumph and requires an additional step of reconciliation with her origins. This is like if Luke realized after destroying the Death Star that he was a moisture farmer all along and had to come to terms with that. (Maybe he could actually grieve for his dead aunt and uncle and his best friend Biggs!)

It's been argued that Harry Potter's journey more closely resembles that heroine's journey, whereas, say, Eowyn from Lord of the Rings ("I am no man!") is a more traditional hero. Action films of today may feature female heroes, but when this is done thoughtfully (not just by taking an action hero and swapping the gender without further alteration), then filmmakers may tweak the structure of the myth to include some gender-specific elements and perhaps blend the two types of journey. These new variants that may or may not resonate in the way that caused the original Star Wars/Campbell formula to become so popular.

Two articles we specifically cite in our discussion are:

For some basics about the journeys described by Joseph Campbell, Maureen Murdok, and a different version by Victoria Lynn Schmidt, see the Wikipedia entries on Hero's Journey and Heroine's Journey.

In addition, The Heroine Journeys Project website features numerous articles about female heroes in media. We also looked at this reddit thread, which among other things provides some opposing views to those of our guests about the Star Wars franchise character Rey.

Note that Vi is an actual martial artist, so maybe don't mess with her lest things end for you like they did for Jimmy in Road House.

This episode includes bonus discussion that you can only hear by supporting the podcast at patreon.com/prettymuchpop. We also had an original scoping call for supporters with Vi that goes a bit more into her background on this topic and includes some more speculation about the connection between mythic structures and modern plots.