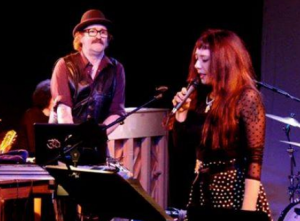 Alexander Hacke has been the bassist of the German experimental group Einstürzende Neubauten since 1980, and his American-born wife Danielle de Picciotto has been a singer and film-maker in Germany since the late 80s. They started collaborating around 2010 and have released seven albums together.

We discuss "The Banishing" and "Third From the Sun" from The Current (2019) and "Propehcy" from Menetekel (2017), plus intro music is "Let There Be Joy" from Joy (2018). We conclude by listening to "Survivors" from Danielle's solo album Deliverance (2019). For more, see hackedepicciotto.de.

Watch the video for another song, "The Seventh Day," from The Current, and here's one  for "Awake," from their first album as hackepicciotto, Preservantia, featuring a lot of Alexander's throat singing. Here's video for a song they both sing on called "Ballad of the Lonely Fish" from 2011's Hitman's Heel.

Here they are as a live duo in 2019 playing "Let There Be Joy," and a couple of years earlier playing a longer tune featuring Danielle's hurdy gurdy. Here's Alexander talking about his equipment.

Here are Alexander and his fellow Neubauten member Blixa Bargeld discussing and demonstrating their creative process, and another "making of" documentary about Neubauten. Watch Neubauten live in 2015 with Alexander playing bass. Here's the group back in 1985.

Here's Danielle performing solo in 2019. Here's a clip from her days with The Space Cowboys. Here she is in 1995 interviewed about her visual art (she's speaking German, but the point is that they're showing a lot of her art) and then in 2012 talking in English about her art and writing.

Sponsor: Visit betterhelp.com/nem for 10% off your first month of online counseling.