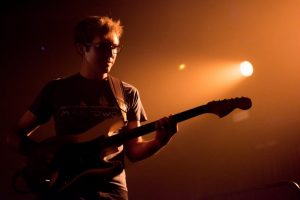 Chris has been guitarist for the Dallas/New York-based fusion group Snarky Puppy since its inception in 2004 and his simultaneously headed rock bands (Oso Closo then Foe Destroyer) and most recently explored acoustic guitar duets.

We discuss "M-Theory" from his main band at this point, FORQ, from their album Four (2019), co-written with keyboardist Henry Hey. The intro music is "Rally," a tune Chris wrote also for that album. We then discuss the title track of Western Theatre by Matt Read and Chris McQueen (2017) and "Coven," a song Chris wrote for the most recent Snarky Puppy album, Immigrance (2019). We conclude by listening to "Strut" from the self-titled album by Foe Destroyer (2013). For more, see chrismcqueen.com.

Watch Chris and Matt perform perhaps the very take of "Western Theatre" that appears on the album. Here's FORQ when founding bassist Michael League (also founder of Snarky Puppy) was still in the group on bass (the drums are J.T. Thomas whom we talk about in the interview but never say his last name). Here's the current line-up.  Here's an in-studio performance by Oso Closo from 2010 (the singer is Adrian Hulet).