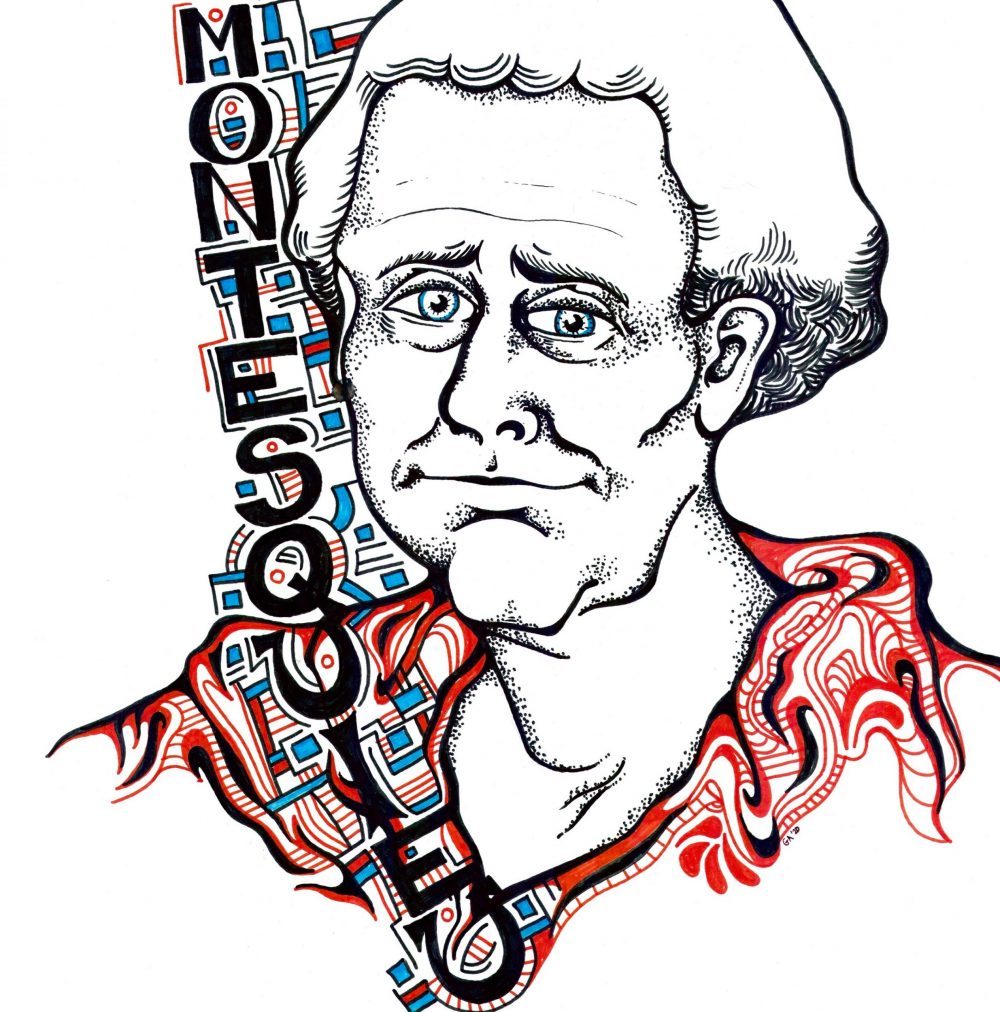 On The Spirit of the Laws (1748) by Charles Louis de Secondat, aka Baron de Montesquieu.

What keeps a society functioning? Montesquieu, though of course not the first political philosopher, was perhaps the first to systematically explore correlations between characteristics of a government, its people, its climate, dominant industries, religion, and other factors. Like Aristotle, he explored republics, monarchies, and tyrannies. Like Machiavelli, he looked at what types of laws and policies work best for the type of government in question. Like John Locke, he argued for the separation of powers and as much liberty for citizens as is compatible with stability.

However, Montesquieu was much less individualistic than Locke and Hobbes. He defines the civil state as what unites the individual wills of the populace. For a democratic republic like ours (of course he only had the ancient Greeks to reflect on, though he did have interesting things to say about the character of the American colonists), the "spring" of society—its motivating force—is virtue, defined as love of country. Democracy decays when the citizens put themselves above country, voting in their narrow self-interest. In particular, he thought that the mass of poor would vote to divide up the wealth of the country among themselves. Individual citizens aren't competent to decide actual policies, Montesquieu argued, but they are able to pick out who in their local jurisdiction is wise enough to represent them. For aristocracies (a type of republic where a particular class rules instead of the whole populace), the virtue that the leaders need is moderation: They need to love their country enough to, again, put its interest above their own, and not press down too hard on the reset of the populace.

A constitutional monarchy runs not on virtue but on honor. The aristocrats serve to counter-balance the king, and so the aristocracy needs to be kept strong, e.g., you don't allow inheritances to be widely split. The nobles will behave because their honor commands that they do, and likewise the king fears the dishonor that would delegitimize his rule in the eyes of the nobles and the people. So in this case, as with Adam Smith's invisible hand, each noble by pursuing the honor that he takes to be his self-interest ends up strengthening the state. This is much easier to engineer than a democracy of virtuous citizens. Still, there's room for corruption, and as with a republic, a corrupt monarchy slides towards despotism.

Montesquieu was no fan of despotism, but he had recommendations for how a despotic regime can be more stable. A tyranny runs on fear, both of the despot (whose power must be absolute) and of each other (so that they want the despot to protect them from other people). The first rule of despotism is that a ruler who is not himself ruled by honor or religion (which acts as a tempering agent in some despotic regimes) will not be interested in the business of ruling, so he'll appoint a grand vizier to do all the real work while he just pursues endless pleasures. This puts the vizier (among others) in a position to potentially take over, so tyrannies tend to be unstable and tend to collapse into other tyrannies as the state is passed from hand to hand.

On top of this type of analysis of the internal functioning of different types of state is Montesquieu's (admittedly very crude) analysis of the effect of climate on people's habits and constitution. In short, he thought that being in the hot south makes people more lazy, sensitive, passionate, and slavish; while living in the cold north makes one strong, less sensitive to pain and emotion, and more conservative (i.e., virtuous). This makes those hot areas more prone to tyranny, slavery, theocracy, polygamy, and other practices that keep people in line. The people there, Montesquieu thought, are actually suited to those conditions, and democracy (for instance) is unlikely to flourish among them.

Liberty, for Montesquieu, is not the freedom to do whatever one wants, but is first and foremost a matter of feeling safe. It involves living under laws that protect us while leaving us free to do as much as possible with confidence that if we obey the laws, we won't incur the ire of the state. The chief guarantee of liberty is the separation of powers, and he talked a lot about England with its constitutional monarchy that created separate chambers representing the nobles and the common people, with the juries that decide individual cases pulled from peers of the accused. The architects of the American constitution took quite a bit of his advice, from the idea that the ruler should be able to only veto but not craft laws, from impeachment as requiring the lower house to bring charges and the upper house to decide them, to geographical representation and the executive being head of the military.

But among all these familiar details is a framework that is very strange, not only regarding his very weird and wrong analysis regarding climate (which is in effect very racist even though he's saying that environment is at fault, not racial character), but the whole system is wrapped up in a pretty pious idea of morality in nature itself that dictates what good law and proper behavior between states ("right of nations") should amount to.

Buy the book or try this online version. There's also a good Librivox audio of most of what we read.