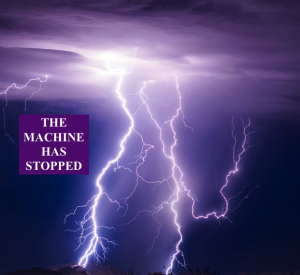 We are Reposting our Discussion on The Machine Stops by EM Forster because The Machine is stopping.

'Cannot you see, cannot all you lecturers see, that it is we that are dying, and that down here the only thing that really lives is the Machine? We created the Machine, to do our will, but we cannot make it do our will now. It has robbed us of the sense of space and of the sense of touch, it has blurred every human relation and narrowed down love to a carnal act, it has paralysed our bodies and our wills, and now it compels us to worship it. The Machine develops - but not on our lies. The Machine proceeds - but not to our goal. We only exist as the blood corpuscles that course through its arteries, and if it could work without us, it would let us die."

On this episode we read The Machine Stops by EM Forster, a cautionary tale written in 1909—on the threat of ungoverned technology. The story follows two characters—Vashti and her son, Kuno, during a time of post-apocalyptic earth. Mankind has been forced to relocate and live underground because the air on the earth’s surface has apparently become unbreathable. As a result, people live in empty rooms—or pods—underground, surrounded by buttons which, when activated, determine their day.

Hear more Phi Fic.
Thanks to Christopher Nolen for the music