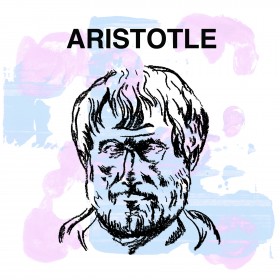 These probably-lecture-notes from around 335 BCE are still used in screenwriting classes today: Aristotle serves up a formula for what will most move us, derived from Sophocles's tragedies like Oedipus Rex.

What is art? Aristotle says it's mimesis (imitation), and fiction (poetry) is imitation of human action in particular, in a manner that shows us what human nature is all about. Unlike history, which tells about a specific thing that happened, fiction uses a specific situation to present something universal, the kind of thing likely to happen given human nature. By seeing a great (but flawed) hero brought low, we experience a mix of pity and fear that gets these bad feelings out of our system; this text is where the term "catharsis" comes from.

A few pieces of advice Aristotle gives about putting together a story: Plot (mythos) is more important than character development. The plot structure is much more important than the spectacle of actually performing the thing: the actors, the music, etc. So what makes a good plot? Well, it should have a big reveal and a sudden reversal of the hero's fortunes, preferably at one and the same point. Also, it should be short enough that you can take in the beauty of the work in more or less one glance, and every element included should be an essential part of an organic whole. And in tragedy, the characters should be better than we audience members, or else we won't identify with and pity them.

If you recall our Santayana episode on art appreciation, you'll be on the watch for theories like this that are clearly post hoc descriptions of something that the author particularly appreciates. Though the lauded tragic plays of his time are what he most clearly has in mind, he also discusses Homer and argues that, for instance, the action of the Odyssey, though clearly too long to encompass in once glance, can be distilled down to a single plot description (a guy floats around for a while before he's able to get home and put his house in order). Though Homeric works aren't quite as emotionally affecting as the tragedies, they have enough of the elements to earn Aristotle's praise on the same structural grounds that the Poetics describes. Note that he does briefly consider comedy and so may have room in his theory for multiple distinct criteria by which works could be appreciated, but if there was more of the text that considered comedy in more detail, it's been lost to history (though people are still looking for it).

Buy the very literal, heavily annotated translation by Benardete and Davis (this has a very good introduction). Or read or listen to the public domain version by Butcher. Seth used the Penguin Classics version by Heath. We also recommend the take on the text by Joe Sachs in his Internet Encyclopedia of Philosophy article. Here, also, is Wes's review of Simon Critchley's Tragedy: The Greeks and Us.