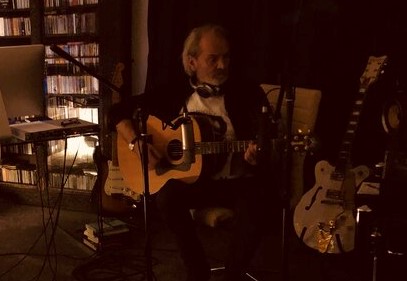 Jack fronted Wang Chung for five albums in the '80s, left the limelight to produce, and got a jazz combo going by 2000 which he's released five albums with, reformed Wang Chung, and only now is having a debut solo release, the double album Primitif.

We discuss "Whitstable Beach" from that album, "Class War and Sex War" by Jack Hues and the Quartet from A Thesis on the Ballad (2015), and "Brahms Blues" by The-Quartet from Illuminated (2006). We conclude by listening to "To Live and Die in L.A." by Wang Chung from Ochesography (2019). For more see jackhues.com.

See Jack's band performing "Whitstable Beach" live. Here he is jamming with The Quartet in 2016. Here's the "Dance Hall Days" video from back in the day and live recently. And the other hits are this and this, plus "To Live and Die in L.A." "Stargazing" is the lead single from their 2012 reunion album. Here's a full 1986 gig for the band. Here's an interview supporting the orchestral album. Here's the 1995 album Jack did with Tony Banks from Genesis.

Here's that album that appears to be by the students in his songwriting class. As Jack mentioned, the Thesis on the Ballad EP is built on poems by Kelvin Corcoran. "Brahms Blues" is built on Op. 116 No. 2 and rhythmically inspired by the Miles Davis track "Great Expectations." Mark's relevant reference from the Davis catalog is "On the Corner."

Visit masterclass.com/EXAMINED for 15% off a MasterClass All-Access Pass.