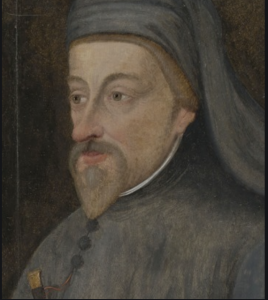 It happened in that season that one day

In Southwark, at The Tabard, as I lay

Ready to go on pilgrimage and start

For Canterbury, most devout at heart,

At night there came into that hostelry

Some nine and twenty in a company

Of sundry folk happening then to fall

In fellowship, and they were pilgrims all

That toward Canterbury meant to ride.

In this episode we are reading selections from the Canterbury Tales by the 14th century English poet Geoffrey Chaucer.  In this Part One of our readings, we discuss the General Prologue, the Miller’s Tale, and the Wife of Bath’s Tale.

In Part Two we will be reviewing the Pardoner’s Tale.

Why read Chaucer?  He wrote in a time that felt like it was falling apart and perhaps becoming something completely different.  His world was hardly a static medieval idyll: it was marked by the Black Plague, a crisis of religious authority, and the breakdown of England’s political order.  The Canterbury Tales is essentially an effort to come to terms with that complex reality.

Written in the late 14th century, the Canterbury Tales is a short story sequence presented as a series of “tales” told by a random assortment of pilgrims.  They pilgrims are strangers, having fallen together into a traveling group by chance and circumstance, but they turn out to be a cross section of the then-emerging bourgeois class.  They tell the tales as a game to pass the time while traveling from London to Canterbury Cathedral, with the teller of the best tales getting a free dinner as a prize.

In addition to the tales, Chaucer lets the tellers speak in prologues where pilgrims explain their lives and perspectives.  The text itself is presented as a recollection of a narrator who refers to himself as “Chaucer,” giving the book a metafictional dimension.

Oddly, this narrator appears to be a bit more naïve than the real life Chaucer, who had a long career as a diplomat and executive for the King of England.  With a “dumb” narrator, the reader is left to puzzle out the book’s underlying ideas without the author’s guidance.  It’s a book that forces you to figure it out for yourself, an approach that seems thoroughly modern, but which reflects a long tradition of philosophical works from the Platonic dialogues onward.

The participants in the discussion include the usual crew, Nathan, Cezary, Laura, Jennifer, and Daniel.

The book was written in Middle English (a creole combination of the French, German, and Scandinavian languages of the time), but most of us read a modern translation.  Have no fear, you do not need to know a lick of Middle English to understand us.  But for a taste of how Chaucer sounds in the original, see the following video showing a dramatic performance of his poem, “Complaint to His Purse”: https://www.youtube.com/watch?v=aeUYtCcBO7I.

If you have thoughts, recommendations, or questions that you want to send our way, please do via phificpodcast@gmail.com.
Hear more Phi Fic.
Thanks to Allan Bowley for help with the audio.
Thanks to Christopher Nolen for the music