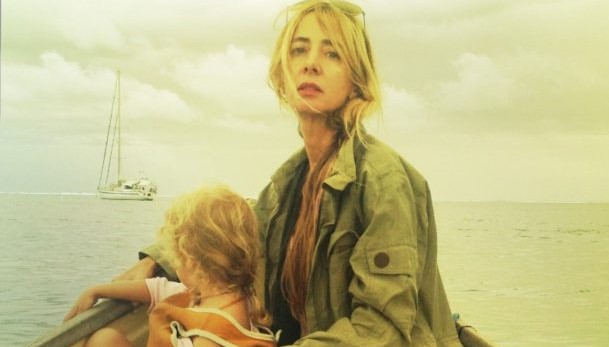 KatieJane gained fame fronting British grunge band Daisy Chainsaw, left after their first full album but resumed the project under the name Queenadreena for four albums in the '00s, then partnered with Chris Whittingham in 2007 to live on a boat and play as the stripped-down Ruby Throat for four albums. That band has now become loud again and been re-christened Liar, Flower.

We discuss "My Brain is Lit Like an Airport" and hear the title track from Geiger Counter (2020), then look back to "Hu’u" by Ruby Throat from Baby Darling Taporo (2017) and "Lesions In The Brain" by Lalleshwari (a one-off solo moniker) from Lullabies in a Glass Wilderness (2007). Intro: "Love Your Money" from Daisy Chainsaw from Eleventeen (1992). For more, see katiejanegarside.com.

Watch an animated video from the new album, another video featuring KatieJane's autoharp, and yet another with her pushing a psychedelic shopping cart. Watch a little Ruby Throat live duo from 2019. Here's a particularly gorgeous Ruby Throat video from 2010.

Queenadreena's biggest hit was "Pretty Like Drugs," and here's the video for "Love Your Money." Here's a full Queenadreena live show from near the end of their run. That super long tune from Lalleshwari that we refer to is "Just One Day of Endless Love."