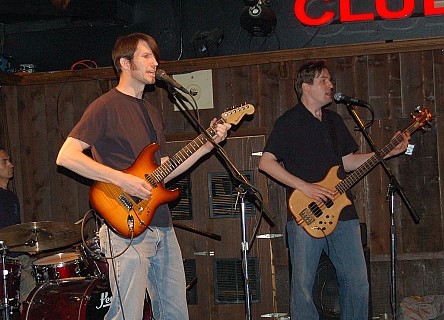 A special, more topic-oriented yet more self-indulgent exercise, where your host dissects the collaborative chemistry with guitarist Matt Ackerman as the two front men of the band New People (2006-2013).

We discuss “Down So Low” from The Easy Thing (2008), “Manager” from Impossible Things (2011), and “Local” from Might Get It Right (2013). End songs: “At the Time” also from that 2013 album and “We Who Have Escaped” (recorded late 2013, released on Mark’s Songs from the Partially Examined Life). Intro: “Love Is the Problem” also from The Easy Thing. For more, see newpeopleband.com and marklint.bandcamp.com.

Mark made a video for “Love Is the Problem.” Here it is live in 2009 (one of our drummer Julian’s last shows with us). The other studio tune recorded for that album was Matt’s “The Last One,” which the YouTube auto-loader has amusingly depicted as “jazz.” Listen to the original demo of “Manager,” released on Mark’s Black Jelly Beans and Smokes album (1997). The other harsh tune on Impossible Things immediately following “Manager” is Matt’s “Irresistible.” We mention later drummer Nate Pinney as a third songwriting voice: Listen to his New People song “Stalk” also from that second album.

Though I describe my solo stuff as generally less slick sounding, I actually did the whole New People engineering process for my latest, Mark Lint’s Dry Folk (2018): recording mostly at home but mixing with Jake Johnson at Paradyme Studios. Still, you can hear that it sounds nothing like New People without Matt’s guitar layers.