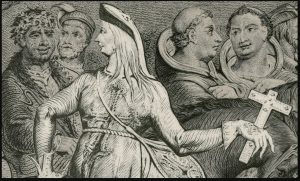 In this episode, we are discussing the Pardoner's Tale from the Canterbury Tales, a book of stories by the Late Medieval poet Geoffrey Chaucer.  This follows up on our last episode, where we discussed other selections from the book, which is about a group of not-quite-pious pilgrims traveling to Canterbury Cathedral who pass the time by telling each other stories. Here is a link to that prior episode and a short introduction to the book.

The Pardoner's Tale, together with its Prologue, is a candidate for the best short story in the English language. It's about a corrupt "Pardoner," someone who sells indulgences for the Church (a practice leading to the Reformation). His Prologue is a confession of his own wickedness, told with unrepentant pride and glee. Silver tongued; he boasts of his skill in persuading people into giving him money for the sake of a religion he obviously no longer believes in. The story he tells is a sort of sermon in the form of a folktale. The moral of his tale is that greed corrupts -- so you should give him your money. This depiction is obviously a satirical attack on the Church's corruption, yet as a character, the Pardoner is strangely attractive, even seductive.

"Greed is the root of all evils.

Thus can I preach against the same vice

That I use, and that is avarice.

But although I am guilty of that sin,

Yet can I make other folk depart,

From avarice, and they repent of it."

Some have read the Pardoner as having residual religious impulses that make him a psychologically complex character, while others have viewed him as a figure of pure evil. Even if the Pardoner is evil, however, it's unclear what we are to take away from our encounter with him. Are we to conclude the Church at the time was also evil and should be abandoned? Does the Pardoner, like Milton's Satan, somehow unwittingly, perhaps Providentially, work toward the good even while pursuing evil? Might the Pardoner's thoroughly secular worldview and dim view of human nature actually be correct in certain ways?

If you'd like to learn more, here is a post that Daniel did for the PEL blog on the philosophical implications of the Pardoner's Tale. The participants in the discussion include the usual crew, Nathan, Cezary, Laura, Jennifer, and Daniel.

If you have thoughts, recommendations, or questions that you want to send our way, please do via phificpodcast@gmail.com.
Click to hear more Phi Fic.
Thanks to Christopher Nolen for our music.
Thanks to Allan Bowley for Audio editing.