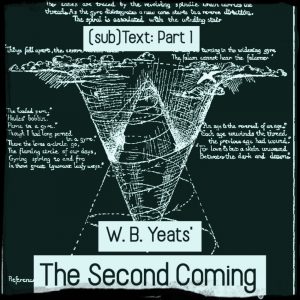 In 1919, the world seemed to have descended into anarchy. World War I had killed millions and profoundly altered the international order. Four empires, along with their aristocracies, had disintegrated. Russia was in a state of civil war, and Ireland was on the verge of its own. It’s these events that helped inspire William Butler Yeats’ poem “The Second Coming,” which famously tells us that “things fall apart,” that “the center cannot hold,” and that a new historical epoch is upon us. Just what rough beast is it that slouches, as Yeats has it, toward Bethlehem? Wes & Erin discuss.