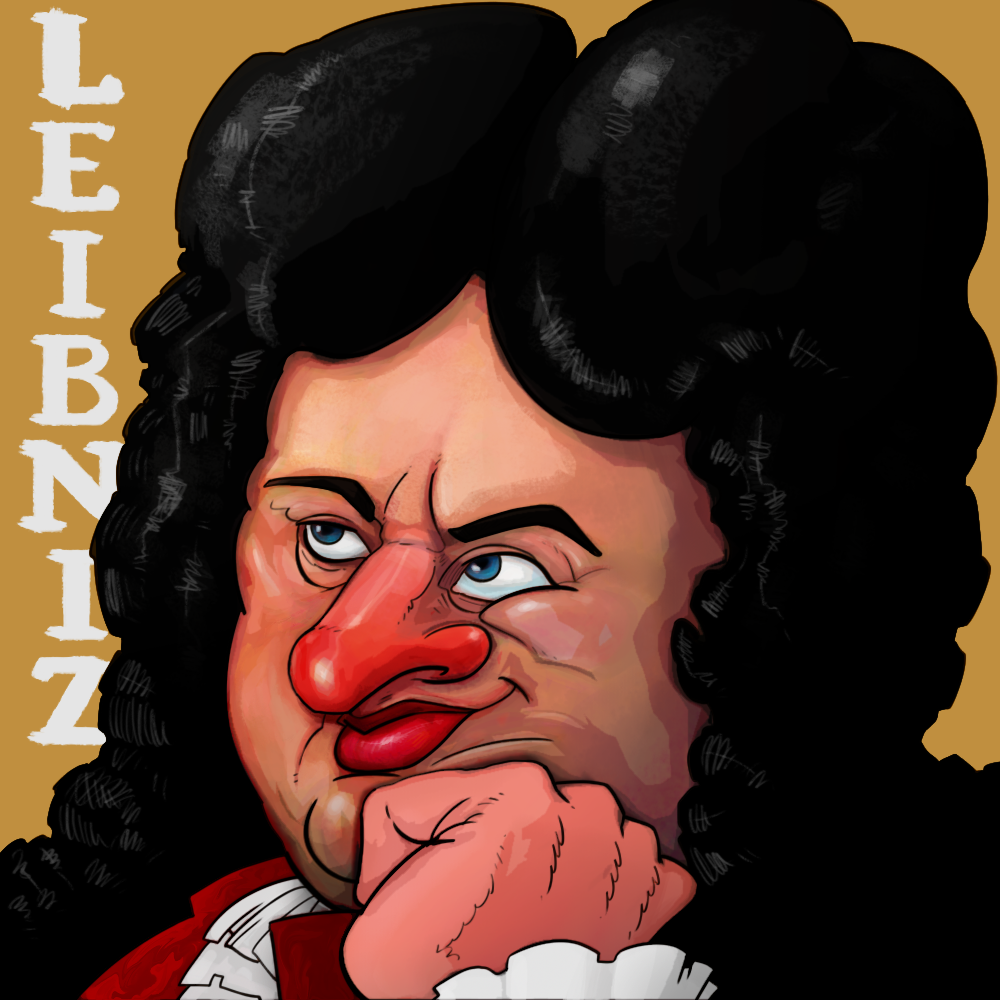 On Gottfried Leibniz’s Theodicy (1710), as considered by Mark, Wes, Dylan, and Seth.

Why does God allow so many bad things to happen, from diseases and other natural afflictions to violence insane and premeditated? This question is often used as a challenge to the existence of a good God as offered by traditional religion. If He's all-powerful and all-knowing, He could foresee any evil and prevent it from happening, yet He doesn't. If you were good and had such powers, wouldn't you step in? Presumably yes. So God must not be good in the way we think, or maybe there just isn't a God at all.

Leibniz thinks this is ass-backwards. First, he thinks it's obvious that there is a God, for all the traditional reasons (see our episode 43). And once you accept that there is such a God, it follows from the definition of such a being that He'd create the best of all possible worlds. This way of putting it is novel, and introduces the way of thinking about counter-factual statements in terms of possible worlds (see our recent ep. 240 on David Lewis). God's omniscience means he not only can scan all actual states of affairs, but all possible arrangements of the world, and his goodness and omnipotence means he will choose the optimum one.

This is an a priori argument, from the very definition of God (like his predecessor Descartes, Leibniz was a rationalist. So if you're ever looking at the world through your finite human eyes and see suffering and viciousness and plans going awry, just refer back to this reasoning. Now, famously, Voltaire's novel Candide (see our ep. 62) satirized this attitude, where a Leibniz-like philosopher character named Pangloss travels with Candide looking on all sorts of horrible things and proclaiming that they're not actually horrible, because this is the best of all possible worlds! This picture misunderstands Leibniz, because Leibniz is not denying that the evil is in fact evil. He's just saying that it can't be the whole picture.

Leibniz gives many arguments and analogies for why God might have to permit some evil in the world in order to allow for greater overall good. Maybe people need the example of the wicked to motivate them to act contrarily, i.e. righteously. Chiefly, much of the evil in the world comes from people's poor choices, and though yes, God could have created people so that they never made poor choices, this wouldn't really be freedom, would it? Free will is a gift from God, a real boon when used well, and with that gift comes the risk that we'll use it poorly. Now granted, some people just have nicer dispositions, more wisdom, or more willpower and so are more easily able to make the right choices, and that seems unfair, since it's God that made us to have these qualities in the degree that we do (of course, we can work at improving ourselves, but even the disposition to do this seems inborn to some degree). In this sense, the problem of moral evil reduces to the problem of natural evil, which is evils like natural disasters that aren't the direct result of anyone's poor choice.

When we reflect on these natural evils, it's even harder to keep in mind the bigger picture. Leibniz ventures that our experience is limited. He actually posits that given how many stars are out there, there's no reason to think that there aren't alien worlds populated by rational beings. Maybe they're on the whole much happier than we are here, so that what we're seeing is the worst, but necessary part of this best possible universe ("world" in "possible world" meaning not just our planet but really the whole of creation). And why should we consider individual human happiness the thing that God has to maximize? There are plenty of other parts of creation, and maybe in optimizing its well-being, we get the short end of the stick. Leibniz even considers theological views whereby most people are damned and only a few are saved; even this sort of situation could be similarly rationalized.

However, Leibniz is not actually a hard-ass in this way. He doesn't think that unbaptized babies or people in foreign lands who never heard the name of Jesus go to hell or any of that. He would deny the Buddhist doctrine that life is essentially suffering and instead observe that illness is actually the exception and health the rule. While our lives may not be drenched in pleasure, Leibniz can draw on the Stoics and Epicureans to say that we seldom receive more challenges than we can really take on, that we generate a lot of our own suffering through excessive striving, and can typically avoid terrible hardships and have resources to adapt to the ones that come our way.

One complication that kept coming up for us in this discussion was the status of human free will, which Leibniz does not analyze directly in this text, other than to say that yes, we have it, even though God knows everything we're going to do before we do it, and that it's a good thing. Leibniz draws a parallel between God's "freedom" to choose only the best possible world and human freedom, which always likewise chooses the best insofar as we can figure out what that is (this is Plato's ethical doctrine). Leibniz disagrees with Augustine that our freedom means we can deliberately choose the good. Leibniz is associated with the principle of sufficient reason, which is often taken as the claim that everything has a cause, which means that people's choices are part of the causal nexus and there's no real sense in which one could have chosen otherwise than one actually did (note that this is probably not what Leibniz meant by the principle of sufficient reason; this is discussed in the Stanford Encyclopedia of Philosophy if you're interested). On this interpretation, our choices aren't really free in the sense that they could have been otherwise, but they are nonetheless considered free if they involve rational deliberation between options: he's a compatibilist a la Kant and Dan Dennett. This is a complicated issue which our discussion does not solve; you might want to read about it in the Internet Encyclopedia of Philosophy.

The discussion continues in part two, where we get into the metaphysical status of evil (a privation), how God wills (antecedent vs. consequent will), and much more.