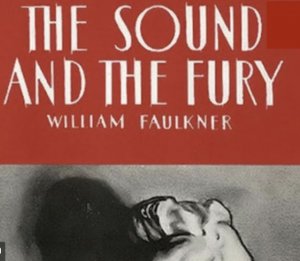 WHAT IS HAPPENING IN THIS BOOK?

In this episode we struggle, spin and madly rub our eyes as we work through the puzzling and enigmatic beauty of William Faulkner’s "The Sound and the Fury".

Father said clocks slay time. He said time is dead as long as it is being clicked off by little wheels; only when the clock stops does time come to life.
-The Sound and the Fury

The Sound and the Fury takes place in Jefferson Mississippi, between 1910 and 1930 and is about the Compsons, a once southern aristocratic family now in a desperate, decaying state.

The book moves back and forth in time and is broken up into four chapters: the first chapter is written from the point of view of Benjy, a 33-yr. old mentally disabled man and the Compson’s youngest son; the second chapter is written from the perspective of Quentin, the Compson’s eldest son, chronicling his life at Harvard and his subsequent suicide; the third chapter is through the voice of Jason, Quentin’s younger brother, as he struggles to be the man of the house after the deaths of his father and brother, his mother’s emotional breakdown, as well as being the charge of his sister Caddy’s teenage daughter, all amidst his anger and vileness toward everyone; the final chapter is written in the third person, following Dilsey, the mother of the black American family who care for the Compsons. The fourth child—Caddy—the only daughter—does not have a chapter of her own though she is arguably the reason for Faulkner writing this book in the first place.

Hello, Benjy.” Caddy said. She opened the gate and came in and stooped down. Caddy smelled like leaves. “Did you come to meet me.” she said. “Did you come to meet Caddy….[she] put her arms around me and her cold bright face against mine. She smelled like trees. “You’re not a poor baby. Are you. You’ve got your Caddy. Haven’t you got your Caddy.
- The Sound and the Fury

There is little plot. And the book is largely written in stream of consciousness.

“The Sound and the Fury” is famous for being extraordinarily difficult to get through as Faulkner mercilessly plays with time, not defining which character is speaking at a given moment, and erratically uses grammar throughout. This is particularly evident in the first chapter written in the voice of Benjy, the mentally disabled son.

Our shadows were on the grass. They got to the trees before we did. Mine got there first. Then we got there, and then the shadows were gone.
-The Sound and the Fury

Join us as we try and make sense of that which defies and revolts against sense. Laura loved the struggle of the read and Cezary had an equitable position. (Nathan was absent). Yet, both Jennifer and Daniel disliked the book finding it a very uncomfortable read. However the overall consensus was that it is a remarkable effort. In 1949, Faulkner won the Nobel Prize to which this work made a significant contribution. "The Sound and the Fury" is considered a masterpiece albeit a “quintessentially difficult work”.

We could hear the dark.
-The Sound and the Fury

Check out James Franco's attempt to film "The Sound and the Fury":

Unfortunately, Nathan wasn't able to join us this time but fear not--he will be back!
If you have thoughts, recommendations, or questions that you want to send our way, please do via phificpodcast@gmail.com.
Click to hear more Phi Fic.
Thanks to Christopher Nolen for our music.
Thanks to Allan Bowley for Audio editing help.