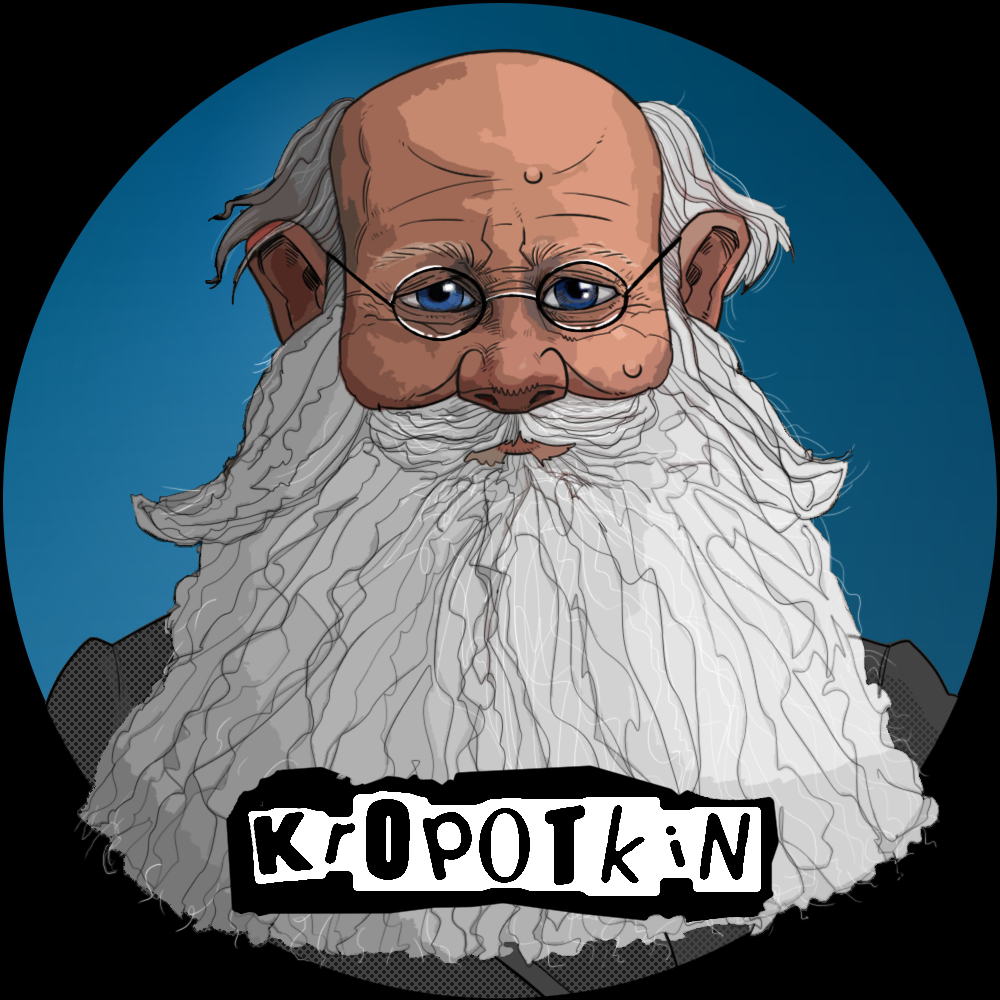 On Peter Kropotkin's The Conquest of Bread (1892), discussed by Mark, Wes, Dylan, and Seth.

If we want an egalitarian society, do we need the state to accomplish this? Kropotkin says no, that in fact the state inevitably serves the interests of the few, and that if we got rid of it, our natural tendencies to cooperate would allow us through voluntary organizations to keep everyone not only fed and clothed, but able to vigorously pursue callings like science and art.

Kropotkin was born a Russian prince, became a geographer and so traveled a lot and became interested in the peasantry, and so rejected his birthright and became an anarchist, leading to his being jailed and having to flee (first Russia, then the same thing happened in France). He wrote this in England with intense historical reflection on three failed peasant revolutions in France: in 1789, 1848, and 1870. In each of these cases, the fighting caused the economy to break down (as one would expect), and the revolutionary leaders failed to mobilize everyone to feed the people. The people then welcomed reactionary crack-down.

The only solution for Kropotkin is for the revolutionary party to, instead of trying to cement themselves as the leaders of a new society, use their fleeting power to direct the people to self-organize: To take stock of what the current supplies are and immediately distribute them so that people are fed and clothed while they then figure out how to organize themselves to get the factories and farms and markets running again. Kropotkin (like right-wing, free-market anarchists such as are considered by Nozick) thought that in normal circumstances, the government really doesn't touch a lot of ordinary interaction, that it's not in a good position to perform central economic planning (see Hayek), and even the basic promise-keeping required by commerce is not something that government able to effectively enforce. We can have a fully functioning economy, he thinks, without the state.

The two main functions the state serves in our current economic system are enforcing private property rights and (increasingly in modern times) preventing abuse of workers. Kropotkin in fact thinks that the state is ALL about keeping property in the hands of its current owners, and that's a main reason why the state should go. Because he thinks mutual aid is a natural telos for human behavior (and animal behavior within a species for that matter; he's got a whole separate book on this), government's enforcement of property rights perverts human nature and gives rise to the abuses capitalists make on workers. If everyone were already taken care of through the abundance of our riches--Kropotkin thinks that scarcity of basic goods is not an issue, that it's just manufactured by capitalists who want to maximize profits--then there'd be no motivation to abuse workers.

So if we were all taken care of, wouldn't laziness rule the day, and everyone would just take as much of the public stock as they could and contribute nothing? No, says Kropotkin: People want to help themselves and each other. If they can grow crops and directly benefit from 100% of that instead of having a landowner take most of it, they'll be all the more motivated. And because there's plenty for everyone, there'll be no motivation for them to hoard their surplus; they'll share it (and in effect trade it, because others will also share) around.

Is this position naïve, about human nature but also about our capacities to self-organize? Kropotkin points to very complex agreements between companies (e.g. to build the railroads in Europe, or the Red Cross) that were able to accomplish mighty feats without some king or other government giving the orders. No doubt today he'd point also to open-source tech collaborations like Wikipedia, universities, scientific societies, and industry groups. The question is, can business get done on a mass scale without a profit motive or government regulation? Given how much both of these lie at the root of our own society, it's difficult for us to envision how this might be possible, but Kropotkin is just going to say that we've been blinded by the dogma of statism (which as I've said, is also the dogma of private property).

Another historical note: After this text was written, the Russian Revolution occurred, and at that point Kropotkin moved back to Russia where he as revered as a great thinker. However, he was as you'd expect very critical of the Leninist system which was of course a strong central government, and shortly after he died, there was a purge in the country of anarchists of his stripe. I mention this largely because any kind of anti-capitalist stance is inevitably interpreted by right-wingers as leading to totalitarianism: Thinking outside of the current system is "utopian," and the only way to bring about a utopia is to force people into it, whether directly a la 1984 or through conditioning a la Brave New World. But the anarchists' disagreement with Karl Marx lies in the latter's claim that before we can get to a free, communist society, we have to go through a period of socialist state. The anarchist's refusal of government is a refusal of any possibility of totalitarianism, unless one takes the latter term in the manner of current right-wing pundits against non-governmental ways of enforcing social norms.

If government withers away, then we have to rely more than we do now on traditions, on public ethics, or moral censure of people directly by other people. That's what's going to keep people from hoarding or being lazy or otherwise undermining the common good. One might object that this kind of control of people by others can be even more invasive and insidious than having laws on the books meant to prevent abuse, and Kropotkin in this text doesn't go into topics like criminal justice. In some past episode (Nussbaum?) we discussed how with the onset of the state, the private revenge motive becomes impersonal, i.e. becomes justice (this was illustrated through consideration of the final part of Aeschylus' Oresteia: The Eumenides, i.e. the "Kindly Ones" that the Furies are converted into). If we reverse that transition, would we then have mob rule instead of the rule of law? Even with the lack of a profit motive, isn't it very possible that we'd have "voluntary associations" that end up bullying each other, like the social groups that form in prisons?

Kropotkin is expressly not giving us a panacea, not shooting for utopia, and in fact thinks that it's the liberal statist who's shooting for something essentially unrealistic: a government that is truly representative of the people and cares about its interests. Again, as soon as some people are in charge, with violence at their disposal to enforce their will, then they will inevitably structure society to serve their interests (and "interests" will have a very clear meaning given current property norms that Kropotkin wants to abolish). This is perhaps the response to the "gang" objection above: Such gangs would be governments, and so anarchism forbids them. But then, again, how does the "forbidding" work in practice? For Kropotkin, it needs to be a matter of each person's utter freedom to self-determination. You've probably heard the saying "What if they had a war and nobody came?" This is Kropotkin's way of heading off conflict scenarios like this. With no profit motive, with no rule of one person over another, with real recognition of our unity as a species, there's simply no motivation for serious (deathly) conflict.

One issue that we didn't go into was whether this communitarian attitude requires some common cultural background. The advantage of a liberal society a la Rawls is that it admits of pluralistic takes on the good. Our discussion with Francis Fukuyama explored the idea that for solidarity, you might need to have some cultural cohesion (a possible rationale for putting limits on immigration, if you're looking for such a thing). Some comments Kropotkin makes sound a little too much like the fascist seeds we might attribute to Heidegger's talk of the "volk." From chapter 9 (p. 104) of the book, here's a Kropotkin quote:

today the united city has ceased to exist; there is no more communion of ideas. The town is a chance agglomeration of people who do not know one another, who have no common interest, save that of enriching themselves at the expense of one another. The fatherland does not exist . . . What fatherland can the international banker and the rag-picker have in common? Only when cities, territories, nations, or groups of nations, will have renewed their harmonious

So you could take this as expressing something like Sandel's mourning that we need settings to develop solidarity between rich and poor (as opposed to the rich being able to buy their way out of any environment where they might have to brush elbows with the hoi polloi), but I should stress that Kropotkin's setting for revolution and egalitarianism is always local. He rejoices in one point (p.72) that the "so-called inferior races" would be able to free themselves from imperialism in the absence of profit motive and the aggression of nation-states, but it's an open question whether he considers people of all ethnicities and creeds able to live together and share, or whether as Fukyama fears that even in the absence of profit motive and nation-states, we'd get fractious groupings based on prideful (thymotic) identifications. Does government currently serve as a needed check on millions of Hatfield vs. McCoy type conflicts? Would anarchism foster world-cooperation or make dream even more distant?

Buy the Cambridge Edition that we read. However, the English language edition is standard (approved by Kropotkin in 1908), so there's no loss except in the page numbering if you just read a public domain version online. You can also listen to the whole thing as an audiobook, which is a good way of getting through the tedious later chapters. We didn't really have a formal reading selection for this apart from "read ad much of it as possible, and skim over the boring actuarial details," but I think we all read through at least chapter 12 "Objections," and probably through 15 "The Division of Labor." For more general information about anarchism, check out the Stanford Encyclopedia of Philosophy article.

Sponsors: Visit TheGreatCoursesPlus.com/PEL for a free trial of The Great Courses Plus Video Learning Service. Organize your Inbox: Save $25 sanebox.com/pel. Learn about St. John's College at SJC.edu.