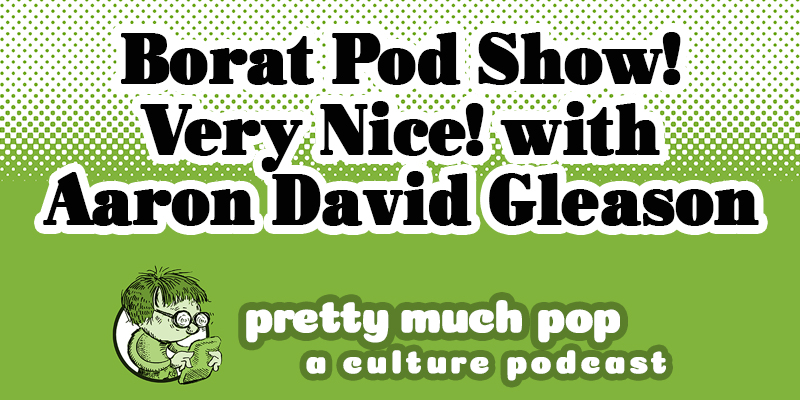 Let's stop obsessing about election matters and consider instead a clown who brings out racism in rubes. Mark, Erica, Brian, and musician/actor Aaron consider the comedy of Sacha Baron Cohen, especially the new Borat Subsequent Moviefilm, which you should definitely go watch before listening, unless it's the kind of thing that so repulses you that you'll never watch it, in which case we are the team to tell you what the fuss is about.

Is it unethical to use unwitting people who signed your release form as your supporting cast? Is it OK to use racism to expose racism? Are cameras now so ubiquitous that many people feel perfectly comfortable letting their true colors show on film? How dehumanizing is the nature of retail in America that all these shop keepers would go along with Borat's bizarre and/or racist requests? Cohen claims that this new film was about demonstrating the humanity of his subjects; how evident was that purpose on screen? How does this film differ from Cohen's other work? Was the film actually funny, or did it transcend (or fall short of) comedy in its politics and its king-size servings of embarrassment?

Watch Cohen and Maria Bakalova on Good Morning America explaining the film. Look at the Wikipedia article for info on how and when sequences were shot. You can browse through the critical reactions yourself.

After we recorded this, Cohen provided financial help to his very sympathetic victim, Jeanise Jones (the babysitter). And to settle one issue that came up in our conversation, Judith Dim Evans (the nice old lady in the temple who subsequently passed away) didn't know the gag during filming, but Cohen revealed it right afterwards.

Hear Aaron's music on Nakedly Examined Music #71. Listen to Aaron, Erica, Mark, and others including Lucy Lawless and Emily Perkins on the Partially Examined Life Players' reading of Lysistrata. Learn more about Aaron at aarondavidgleason.com, and you can follow him on Instagram @aarondavidgleason.

This episode includes bonus discussion featuring more Aaron that you can hear now by supporting the podcast at patreon.com/prettymuchpop. This podcast is part of the Partially Examined Life podcast network and is curated by openculture.com.