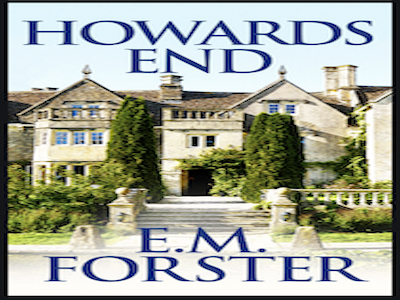 SO SORRY FOR BEING AWAY TOO LONG! GUESS WHY? BEGINS WITH "P" AND ENDS WITH "C".

In this episode we discuss EM Forster’s novel Howard’s End as well as take a look at the 1992 movie of the novel starring Anthony Hopkins and Emma Thompson.

“Death destroys a man, but the idea of death saves him—”

The story revolves around three families: the Schlegels–– half-German siblings Margaret, Helen, and Tibby whose cultural pursuits have much in common with the Bloomsbury Group (in which Forster was a member); the Wilcoxes—headed by Henry––a group of unsympathetic rich capitalists with a fortune made in the colonies; and the Basts, a sad and struggling young couple from a lower-class background. Each reflects a different and almost conflicting part of society--a tale of striking class warfare.

In the course of their exchanges, interactions and confusing disputes, Margaret Schlegel ends up marrying Henry Wilcox, setting a complex, profound stage for contrasts and actions which go to the source of who these people are and their impenetrable backgrounds.
One of the episodes, if not the major one, is when Helen, Margaret’s younger sister takes issue with Henry because his advice for Leonard Bast to leave his job at a company which Henry, through business speculation, predicts will fail causes the young man's unduly and frightening unemployment. Helen believed it was Henry’s materialistic blindness and self-concern that found him putting Leonard in this position—and now Henry is marrying her sister! She’s furious.

Howards End is actually a house in the country from where everything of consequence emerges—literally and metaphorically. It defines everything and everyone inthis fascinating study of human behavior. Join us as we pick apart the struggle these families endure with each other.

“Margaret realized the chaotic nature of our daily life, and its difference from the orderly sequence that has been fabricated by historians. Actual life is full of false clues and sign-posts that lead nowhere. With infinite effort we nerve ourselves for a crisis that never comes. The most successful career must show a waste of strength that might have removed mountains, and the most unsuccessful is no that of a man who is taken unprepared, but of him who has prepared and is never taken. On a tragedy of that kind our national morality is duly silent. It assumes that preparation against danger is in itself a good, and that men, like nations, are the better for staggering through life fully armed. The tragedy of preparedness has scarcely been handled, save by the Greeks. Life is indeed dangerous, but not in the way morality would have us believe.

Jennifer notes as she pinpoints what she thinks Emerson’s overall message is one of a society so disconnected, “you can’t really have balance--you can’t know what you don’t know...you can’t know what it’s like to be poor. You can’t know how your wealth keeps you out of touch…”. And Dan’s echo: This book’s significance to me is that I have a very bifurcated life [and] it puts its finger on how you combine these two sides of life…” And Laura homed in on the importance of the house/estate of Howard’s End, quoting a key line from Hannah Arendt’s study, The Human Condition: “"The reality and reliability of the human world rest primarily on the fact that we are surrounded by things more permanent than the activity by which they were produced…” Finally Cezary notes how Margaret sided with Henry, her new husband, despite her sister, Helen’s, outcry over Henry’s dismissive actions against Leonard—that “she sided with family despite whatever your professed liberal beliefs are…”

Nathan wasn’t able to join us this week but will be back for our next discussion on Point Omega by Don DeLillo.

If you have thoughts, recommendations, or questions that you want to send our way, please do via phificpodcast@gmail.com.
Click to hear more Phi Fic.
Thanks to Christopher Nolen for our music.
Thanks to Allan Bowley for Audio and editing help.