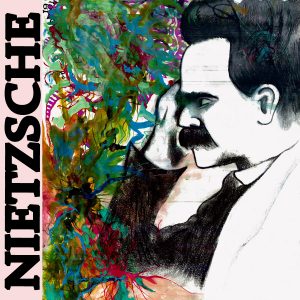 On Friedrich Nietzsche's The Genealogy of Morals (1887), "Third essay: what do ascetic ideals mean?" featuring Mark, Wes, Dylan, and Seth.

When people really get serious, and try to put away frivolous things, is that good or bad? A serious athlete will subordinate everything to their training, an artist may even forget to eat or sleep while crafting a work, and of course at the extreme, a religious mystic might completely withdraw from the world and its temptations to put their energy entirely on their connection to divinity. Nietzsche analyses these extreme behaviors as following from ascetic ideals. But while in these cases asceticism is most obvious, the ideal actually rules us all to varying degrees through the values that religion hands down to us.

The civilization of the human animal amounts to the creation of a super-ego to tamp down on some parts of ourselves. For an artist or scholar or warrior, this self-denial is a matter of focusing on some activity that is seen as more important than the parts being repressed, and so Nietzsche finds this admirable. It's clearly a manifestation of our will to power, like sharpening yourself to a keen point to be more effective, even though doing so involved shaving off a lot of parts of yourself, i.e. not being well-rounded in a more healthy way. But self-denial can also be in favor of, well, nothing, a uniform quashing of the self in favor of some external ideal, as when one simply bows down to a king or god or idol, putting all value on that worshipped thing and none on oneself. This is clearly self-destructive, according to Nietzsche, but nonetheless also has its source in the will to power, because by bowing down and subordinating yourself to something you've elevated to the highest, you're now on its team, your will is now through it subordination one and the same as what you posit to be the most powerful force.

This episode is formally a sequel to our long-ago episode 11 where we discussed the main thesis and first two essays of The Genealogy, in the context of introducing meta-ethics, which is the question of where values come from and what makes them binding upon us. For Nietzsche (as for Locke), they come from our psychology (the will to power, for Nietzsche) and from social customs, which are influenced by psychology but which change dynamically over time. His Genealogy gives a rough history of values: Originally, our values were roughly animal, prizing strength and self-expression: the will to power undiluted. Then with the rise of Judeo-Christian morality (and really, he could craft similar stories about the evolution of Eastern moralities), those animal, "master" values were turned on their head and against themselves, such that raw exertion of power was now labeled as "evil," and self-effacement, voluntarily (or otherwise) making oneself weak, was considered good. The book's second essay details how we develop "bad conscience" in light of such a "slave" morality, with the clear implication being that we need to overcome that self-denying system, not so much to go back to being an unrestrained animal, but to more wisely exert these newfound powers of introspection and self-control to create great philosophies and artworks and our own character.

The problem with the picture many readers take away from this reading of The Genealogy is that it's too binary: Nietzsche has told the story of how the master morality's "good" and "bad" were switched around such that what was good is now called "evil" and what was bad is now called "good," and what that leaves us with is a clear call to new values that are more like the master morality. All those slavish priests should be condemned, and maybe those self-confident self-promoters should now be admired. Go seize the day and make your mark on the world! This third essay adds nuance to the picture: The ascetic ideal is a chief tool of the will to power. It of course must have been present in ancient Sparta with its rigorous warrior training, but it was greatly developed (according to Nietzsche) by priests as a sneaky way of turning their strength-denying ways into the dominant social, political, and moral force. Nietzsche is obviously in favor of philosophy, and art, and science as opposed to superstition, and all these practitioners use this tool of asceticism to define and defend their domains, so that philosophy becomes not mere speculation, art becomes not mere dabbling, and science acquires a rigorous methodology. Asceticism is in short professionalization for these areas.

So the same tool has both good and bad uses for Nietzsche. But we need to watch out: The single-mindedness that allows a writer to produce a great work also by its nature creates blind spots, and the chief one that Nietzsche focuses on in the end of his essay is one that we considered in our second foray into Nietzsche's work: ep. 61 on his unpublished early essay "On Truth and Lies in a Nonmoral Sense." The blind spot is our faith in the pursuit of truth at all costs. We think of science and religion as opposed, but the scientist for Nietzsche has elevated "truth" into the spot that God used to hold and still acts religiously toward that object. Nietzsche wants us to extend the questioning involved in science (and philosophy, and yes, in art too) to this pursuit of truth (or beauty as a species of truth, in the case of the artist) itself. It's difficult to tell exactly what this means in practical terms, but in terms of attitude, it means pursuing science and philosophy cheerfully, with self-deprecating modesty, i.e. "gay science" (the subject or our third Nietzsche episode, #84).

Ultimately, awareness of our ascetic tendencies is I think meant to make us more well-rounded. Yes, be an extreme athlete or artist, or whatever you need to do to try to make your life great, but keep well-grounded in doing so; don't lose the larger perspective that you'll need if you break a leg or lose some artistic opportunity or capacity. Nietzsche uses the case of Wagner to show you what not to do and what one might do while aging. Nietzsche had admired the great world-building in Wagner's operas, but found Parsifal to be sentimental Christian dreck. On Nietzsche's reading, Wagner basically scared himself and retreated to provincial morality as his way of getting serious, getting back to basics. Nietzsche suggests instead that if the weight of world-building is to heavy, Wagner should have instead jumped in his next work to a meta level, satirizing his creative process. This is the way the dialectic of creativity is supposed to work: You overcome what you've done in the past to create something new, whereas Nietzsche thought Wagner in creating Parsifal was not overcoming but just retreating from his own greatness.

As with many of Nietzsche's critiques, this may seem a difference that is just a matter of opinion. Had Wagner created a satire of himself, this might also be seen as a self-rejecting retreat rather than a triumphant overcoming. To be generous to Wagner, I'd venture that only artists themselves can really say whether they're progressing or regressing along their idiosyncratic dialectical paths, even while we should acknowledge that self-knowledge is far from perfect, so there's a role for critics like Nietzsche in the process to help us see past our blind spots. This idea of a dialectical progression in self-comportment (including creativity, ethics, and pursuit of truth) was the foundation for Simone de Beauvoir's The Ethics of Ambiguity, as discussed in our episodes 140-141. She condemns "the serious man" directed by the ascetic ideal, and also "the nihilist," which is just a serious person whose faith in his god has been destroyed. As Nietzsche says in the current book, we prefer to will nothingness than to not will at all.

Importantly, though, Beauvoir also rejects the next step in the dialectic, "the adventurer," which may be Nietzsche himself or at least a reasonable interpretation of this exhortation to "gay science." Such an adventurer will pour himself into an endeavor, but temporarily, and then move on to the next thing, which to Beauvoir betrays a shallowness as opposed to a real ethical engagement. So would Nietzsche condemn Beauvoir as in fact too traditional, too "serious," or does Nietzsche's own passion for writing and capturing the subtlety of philosophic truth show that he is no mere adventurer and in fact fulfills Beauvoir's ideal? Ultimately, if we're engaged in this inner struggle, then we've bought into Nietzsche and Beauvoir's program of self-development, which is probably all they could've really wanted from us.

Buy the book or try this online version.