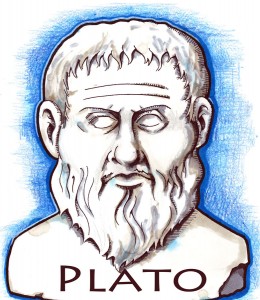 On the later Platonic dialogue from around 360 BCE, with Mark, Wes, and Dylan.

How is nature put together? Plato, speaking this time through the fictional character instead of Socrates (who is present, but only Timaeus talks after the first part of the dialogue), paints a picture of the creation of the cosmos and our place in it. The overall principle is the same as it was later for Leibniz: The "Craftsman" (sometimes translated as the "Demi-Urge") creates everything to be as perfect as possible, and this single principle is enough to allow Plato to come up with a "likely story" about the world. The story is only "likely" because it's about nature, which is changeable and murky, unlike the timeless, perfect world which Timaeus says that the Craftsman used as a model to create our world.

He doesn't say a whole lot about this perfect world, but since (according to Platonic philosophy) this perfect world of Forms exists, then of course a good Craftsman (i.e. God) would use this as the model for creating our actual world. However, with embodiment comes compromise. For instance, to protect our brains, our skull should be as thick as possible. But the need for us to sense the world conflicts with that, so we get the skull we have, with some good protection but also with vulnerable holes in it.

Timaeus' account is divided between descriptions of the creations of intelligence, which is the fundamental cosmology, then the creations of necessity, which is about these "compromises" that come with embodiment, i.e. fundamental physics, and then about how intelligence and necessity work together, which includes biology. The beginning and end of the dialogue make the context clear: This whole cosmology is part of an account of how we fit in the world and hence how we're supposed to behave.

So what is the best possible cosmos like? Well, it's a sphere (Parmenides agreed), with nothing outside it, and it rotates, because movement is good, and, well, there's nowhere for it to go, so spinning is the best kind of movement. It's also alive: it has soul baked right into it, even though it doesn't need sense organs (there's nothing outside of it to sense!). What having a soul, having life, amounts to is following one's nature, which again in the case of the whole universe is just to spin, fully self-sufficient and happy.

What is this sphere made of? Well, the Craftsman combined the unchanging indivisible substance (you know, the kind that Forms are), and combined it with the divided, changing substance (Becoming, i.e. the world as our senses encounter it). The result is an intermediate substance that has both identity and difference in it. By adding these elements, the Craftsman was able to create all the planets and stars that revolve around us, again, moving in a circle, which is apparently interesting enough to constitute all that these very much living, intelligent beings have to do. And the movement of these heavenly bodies literally creates time, so it's not that time was passing and the Craftsman was doing things in time like your or I would, but the Craftsman is more like the Judeo-Christian God in being unbounded by time, and so descriptions like "first the Craftsman made combined these types of matter and then made the planets" have to be understood as merely similar by analogy to how we create things in time.

After time was going, though the Craftsman did create the rest of the Greek gods and gave them instructions for making us. Where do our souls come from? Well, the Craftsman mixed the leftover ingredients from creating the universe (and these leftovers were less pure than the stuff used to make the heavens), and made our souls, which were not yet in bodies, but more hanging out with the Forms so that we could later dimly recall them after being born.

The important new element in the second section of the dialogue about physics is the "receptacle" (aka the chora). This may just be another way of putting the earlier point about the eternal stuff being mixed with the worldly stuff, but here he talks about the Forms being the father of creation and the receptacle being the mother. Keep in mind with this analogy that belief in ancient Greece that it's entirely the father's DNA (of course no one called it that) that determines the character of the baby, and the mother's womb just provided the material that the baby was made out of. So it's like the Forms (the perfect realm that the Craftsman used as the model for creation) provide a blueprint, and then the receptacle is this entirely characterless stuff that the blueprint is realized in. Timaeus gives the analogy of making a perfume: before you add the scented elements, you have to have some unscented material (presumably water) to add the scent to. Or maybe the Forms are like stamps that give specific shapes to plain wax. Chora is sometimes translated as just "space," but this isn't exactly right, because there's no empty space for Plato any more than there's an empty grid of time that things then happen in. Rather, time as I said is literally created by the motion of the heavenly bodies, and space is just matter. So the receptacle is just featureless matter that becomes particular elements (air, fire, water, earth) by being crafted into certain three-dimensional solids based on triangles: This is called geometric atomism, where earth has cubic atoms and fire has very pointy ones, which explains what burning is: being hit with a bunch of very pointy molecules that pierce and destroy things, and this sort of disruption is called heat.

The third part of the dialogue about biology gets into these sorts of interactions between our bodies and our environments. First it describes how our bodies were optimally put together: You've got that well protected head which houses the rational part of the soul, well positioned to be in charge, and then of course that head should be able to move around the environment, which is why we have legs. The body has to nourish itself, which is why we have the guts (which are as far as possible away from the head so that they don't exert undue control over that head), and it needs to strive and defend itself, which is why we have the heart and lungs. These are the famed three parts of the Platonic soul: reason, spirit, and appetite, and they're all set up there inside us to be properly balanced, i.e. with the head giving the orders, helped by the heart. Even the guts have their uses, of course, and an organ such as the liver will tell us if we're abusing it by letting off bile to make us feel bad.

And so this is the message of self-care: Keep your soul in balance, rotating as it were just like the heavenly spheres, and it's in fact contemplation of those heavenly bodies that brings out our philosophical spirit and teaches us how to likewise move in the harmonious way appropriate to us. So education is key: We start out life as children ruled more or less by our guts, and without proper education, we may remain that way, and so become slaves to gluttony or avarice or other out-of-balance goals instead of being ruled by reason. But this is not because we're evil by nature, or that we freely choose evil, or that the Craftsman has made a mistake. As with my example of the skull with holes, everything about our biology is a compromise between competing goals, and the very phenomenon of mortal embodiment means that our bodies will break down eventually and have certain vulnerabilities. The circumstance of upbringing may well make some people remain slaves of their guts, and hence probably die early, whereas the best and peaceful way to die is just for the continual onslaught of atoms against our person (again, just an unavoidable fact of embodiment in the physical world) to eventually wear us down. And when one body dies, its soul is still around to potentially go into other bodies or just hang around in the eternal realm.

Buy the translation by Robin Waterfield that we read or read an older translation online. LibriVox also offers a free audiobook version.