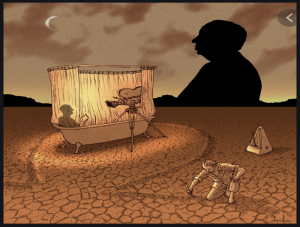 PSYCHO AND THE IRAQ WAR!

“The less there was to see, the harder he looked, the more he saw.”

In this episode, we work through and analyze Point Omega by Don Delillo, a short oblique and arresting novel wrestling with the meaning and effect of human perception, consciousness, space and time.

The story follows documentary filmmaker, Joe Finley, when he visits the proposed subject of his next project—Richard Elster, a scholar who had been brought in to intellectualize plans for the Iraq War troop deployment. Elster’s argument laid the war into a haiku format—"I wanted a war in three lines...”—the same format of the novel. Elster is brought in by the government because of an essay he wrote on the etymological history of the word “Rendition” which begins with: “Every government is a criminal enterprise.” Finley visits Elster at his get-away home in the desert. They converse about Elster’s work as Finley makes his case for the film, which Elster is hesitant to do. Halfway through, Elster’s daughter, Jessie, visits. Her stay is nondescript until she suddenly disappears causing an unexpected mystery and awakening emotional life in cerebral messiah, Elster—grief, mourning, where the meaning of all he believes in is questioned

Surrounding this central story, are two chapters—the haiku structure of the book. The first and third chapters take place in a museum room where the film “Psycho” is being played in a slowed down time-frame over 24 hours. The first chapter is shown from the POV of a mystery man. In the third chapter, Jessie appears, meeting the mystery man.

“This is something we do with every eyeblink. Human perception is a saga of created reality. But we were devising entities beyond the agreed-upon limits of recognition or interpretation. Lying is necessary. The state has to lie. There is no lie in war or in preparation for war that can’t be defended.”

Of note, 24 Hour Psycho was an actual art installation by Douglas Gordon created in 1993.

“What I wanted was a set of ideas linked to transient things. This is the soul of haiku. Bare everything to plain sight. See what’s there. Things in war are transient. See what’s there and then be prepared to watch it disappear.”

f you have thoughts, recommendations, or questions that you want to send our way, please do via phificpodcast@gmail.com.
Click to hear more Phi Fic.
Thanks to Christopher Nolen for our music.
Thanks to Allan Bowley for Audio and editing help.