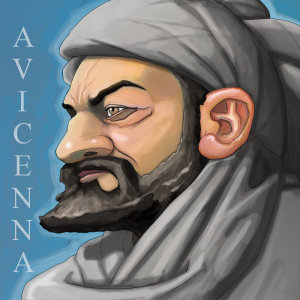 This preview gets into some of the metaphysical and epistemological views that lurk behind these two arguments.

We start by drilling more into Avicenna's metaphysical picture via his concept of necessity, and how we know that the mind is necessarily (essentially, according to its nature a.k.a. quiddity) different than the body. When you know something's essence, you know what would be required for it to exist. The flying man knows that his essence has existence, but is not aware of his body, so he knows that this essence does not include the body; the body is not required for that essence to be instantiated (i.e. to exist). But does self-awareness really amount to knowing that your essence at all? Yes, for Avicenna: What a self really amounts to is a self-aware soul.

In the full episode, we also talk more about self-consciousness and how this relates to the teleological part of our nature: For Avicenna (as for Aristotle), our nature as rational animal means that our unique essence is to be able to think better, and better here (as for Plato) means to be pointed toward God. To not do philosophy is to live as an animal. Also, we look at Avicenna as a rationalist: If you're sharp enough, you should be able to figure out all these fundamental truths about God and the self without being taught them, and that's not because we recollect them a la Plato, but because we can derive all of philosophy from analysis of our experience, just as in the case of the flying man.

Another concept that comes up is "mental existence" and how this might apply to infinity. Avicenna (like Aristotle) believed that the universe was eternal, so there can be an infinite chain of causality going back in time, but there can't be an actual infinity of causes existing at one instant, just like (per Zeno's paradox) there aren't an actually infinite number of points on a line, even though one could keep dividing that line indefinitely.

We wrap up by considering how God's properties are supposedly derivable from his basic essence as the one necessary being and the cause of the universe. For instance, God must be "simple" because if He had parts he would depend upon those parts. He's also "unique" because if there were two necessary existents, then there would be some property that would differentiate them, and that property would be a cause (a condition) of those necessary existents, but we've already said that the necessary existent has no cause, i.e. doesn't depend on anything else. Most of these end up being negative descriptions, i.e. descriptions of things that God can't be or can't have due to His having no determining qualities that would make Him into a multiplicity or something that is caused in any way by that quality. For instance is God "perfect"? Well, yes, in that He lacks any imperfection, but no in that He doesn't have that property "perfection"; strictly speaking He transcends perfection.