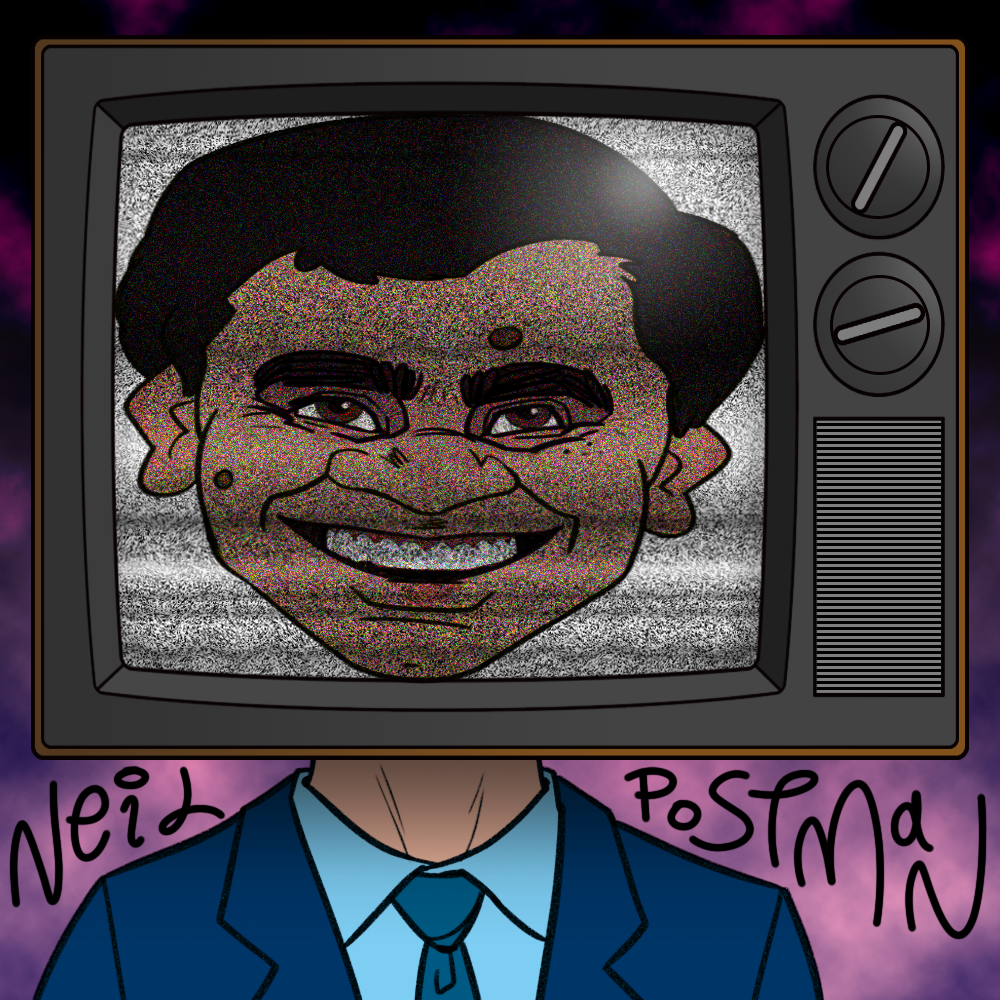 On Amusing Ourselves to Death: Public Discourse in the Age of Show Business (1985), featuring Mark, Seth, Dylan, Wes, and guest Brian Hirt, the co-host of Pretty Much Pop with degrees in linguistics and science education.

Sponsors: Save 20% on an annual membership of at TheGreatCoursesPlus.com/PEL. See headspace.com/PEL for a free month's access to a library of guided meditations. Learn about St. John's College summer programs at SJC.edu/summer2021. Get a loan to lower your monthly payments at Upstart.com/PEL.

How does the form in which we receive media affect how we think? Postman tweaks Marshall McLuhan's famous slogan "the medium is the message" to say "the medium is the metaphor." This means that how we experience information gives us an image of how the world is. If we primarily interact with the world by talking to people face to face, then the world seems very small, and the kinds of things that are important are those that are amenable to being expressed that way. Aristotle's Rhetoric concerns the forms of arguments that are likely to convince a crowd, and Plato in the Phaedrus was concerned that the advent of writing would ruin authentic communication and cause people to let their memorization skills deteriorate.

With writing, and moreso with the advent of the printing press, on Postman's account people's attention spans got longer, and they were used to being able to follow lengthy chains of reasoning. Descartes reminded us in his Rules for Direction of the Mind that this understanding can be illusory: that we only really understand a lengthy chain if we can hold each link of it in turn in our minds and see clearly how they all fit together. Still, the metaphor that writing conveys is that the world is a reasonable place, that its truths can be conveyed impersonally via something objective like a book, and that to apprehend these truths, we have to stop and study. Also, due to the effort it takes to print a book, the presumption is that the written word is authoritative; this is not just some random joe writing on the Internet.

With the advent of the telegraph, it's as if the vast distances of the world shrink. Because its messages are so short, they're devoid of context. When they're reported as "news," there's probably very little in the way of useful actions we can take on receiving them. A newspaper then becomes a disposable collection of out-of-context, useless bits of information, and yet this is something that serious people are supposed to read and take seriously.

When television is invented, things get worse: Television (like radio) also presents information without context, as we need to be able to understand at any time we may turn it on. But television adds images, and the commercial forces that require that people keep watching mean that these images must be as attractive as possible and that the image and sound experience must be as entertaining as possible. While advertising in early newspapers was aimed at providing information about available services, it becomes empty sloganeering, and politics follows suit, becoming reduced to sound bites. TV news lurches from one disconnected fact to another with the same cheery demeanor reducing everything to meaninglessness. Everything shifts to a narrative and/or musical presentation to be more entertaining; we expect an quick emotional hook and get bored by anything else.

Postman claimed that this has had terrible effects on our attention spans, our ability to reason and make sound decisions, to understand (or even feel) anything requiring depth, and to learn. As primarily an educator and theorist about education, he thought that while, per Dewey, yes, of course we learn better when we have some practical engagement with a subject and aren't just being handed dry subject matter, but TV's prevalence in the culture has created the expectation that learning must be entertainment. Like Allan Bloom, Postman complained about students today being ruined by modern culture, unequipped for the reflective engagement that a liberal education requires. TV is (using McLuhan's term) a "hot" medium: It fills our senses, giving its passive spectators no chance to interact or even stop to think (at least not with complexity beyond Dora the Explorer). If TV provides us with a metaphor (or a "myth" per Barthes) for the way we expect the world to work, then we become passive spectators in our lives, ripe for fascism and other nasty things. Postman claimed that this is the blueprint for dystopia a la Brave New World.

This can be considered another entry in our ongoing social construction series, providing a concrete example of a way in which our social environment, and hence our minds, are allegedly constructed. (For a more concrete version of this hypothesis in linguistics, Brian mentions the Sapir-Whorf hypothesis.) What is Postman's solution? Not giving up TV; it's too late for that. The best we can do is, through education, foreground this process of construction so that we are not unwitting victims of it.

Buy the book or try an online version.

Since the book is from 1985, an obvious question is how the Internet fares as an advance over TV. Yes, it's more interactive, and you can easily get context by digging deeper with more searching into a topic. However, it's also geared even moreso to shorter attention spans and context-free information delivery, and given the ease of posting, the information we're exposed to (especially on social media) can be of much lower quality than we'd get from books or even curated TV news. A prominent writer in this area is Nicholas Carr, and we looked at a widely read article he wrote for the Atlantic in 2008 called "Is Google Making Us Stupid."