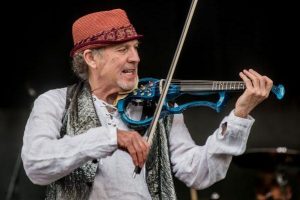 David played in perhaps the most revered line-up of King Crimson at the end of its original run from '72-'74. He's been an actor and teacher, then released his first "solo" album (as Low Flying Aircraft) in '87, then eight more under his own name or as The David Cross Band plus several collaborations.

We discuss "Predator" by Cross and Jackson from Another Day (2018), "The Pool" (co-written by bassist Mick Paul and guitarist Paul Clark as well as King Crimson lyricist Richard Palmer-James) by The David Cross Band from Sign of the Crow (2016), and "Awful Love" (also co-written with Mick and Richard) from Closer than Skin (2005). We conclude by listening to the title track from Crossover by David Cross and Peter Banks (the original guitarist for Yes who passed away in 2013; this was a 2010 jam session finalized in 2020). Intro: "Exiles" by King Crimson from Larks' Tongues in Aspic (1973). For more, see davidcrossband.com.

See the David Cross Band in their latest video, "Starfall." Here's the band live with David Jackson. Here's just the two of them live. Watch him improvise with flautist Andrew Keeling. Watch David live with Stick Men playing some King Crimson tunes. Watch King Crimson live at their craziest in 1972.

Hear a song from David's 2015 collaboration with Robert Fripp (King Crimson leader) where they rearrange a Crimson classic. Listen to one of the highly arranged album tracks with Andrew Keeling. Some of the tracks from Crossover have much more overdubbing; this one features Geoff Downes and Jeremy Stacey. David's most recent solo album Crossing the Tracks is actually a duet: Producer Jurgen Engler provided the backing tracks for David to solo over; this song also features singer Sonja Karaushofer. Hear David's first full solo album from 1989; here's the Low Flying Aircraft album from 1987, also featuring King Crimson guest pianist Keith Tippett.

Sponsors: Get 15% off an annual membership at MasterClass.com/examined. Visit nebia.com/nem and use code NEM for 10% off your shower upgrade and accessories.