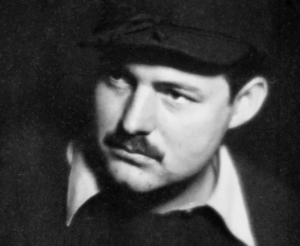 WAS THIS HIS BEST?

In this episode we discuss Ernest Hemingway’s last published work in his lifetime: The Old Man and the Sea. It won the Pulitzer Prize in 1953 and contributed to his being awarded the Nobel Prize in 1954.

And all of us wondered as read and reread and debated—of all Hemingway’s writings, was this the one that should have achieved those awards?

The story is about a Cuban fisherman named Santiago who has not caught a fish in 84 days. He’s heading out to sea to try and break his bad luck. He travels in a skiff to find his prey and ends up catching a huge marlin. He engages in a long mental battle with the fish as the marlin, with the bait and hook securely in his mouth, pulls the old man out further and further to sea. He is alone in the vast waters—alone with the fish.

“Fish,” he said, “I love you and respect you very much. But I will kill you dead before this day ends.”

-Old Man and The Sea

When the marlin starts circling the skiff, the old man attacks him with a harpoon and kills him. He ties the marlin to the side of the skiff and heads back to shore. This is the largest fish he has ever caught—alone. Yet, the damage to the fish from the old man’s harpoon bleeds out into the water, attracting sharks. They end up devouring the entire flesh of the marlin—leaving only his skeleton hanging there as the old man arrives back at land. He is broken. He heads back to his hut and falls asleep.

"I wonder why he jumped, the old man thought. He jumped almost as though to show me how big he was. I know now, anyway, he thought. I wish I could show him what sort of man I am. But then he would see the cramped hand. Let him think I am more man than I am and I will be so. I wish I was the fish, he thought, with everything he has against only my will and my intelligence."

-The Old Man and The Sea

Join our debate as we all struggle with our feelings about this book--some good--most torn. Hemingway has been considered the greatest writer in the 20th century--he changed the way we write. He introduced a new style, broke ground with content such as in bringing sex into the story and forged a different way for authors to consider themselves.

-The Old Man and The Sea

Cezary couldn't be here for this one but he'll be back soon!

Take a look at the award-winning movies starring Spencer Tracy in 1958:

And please watch the recent documentary on Hemingway by Ken Burns and Lynn Novick—it’s remarkable.

If you have thoughts, recommendations, or questions that you want to send our way, please do via phificpodcast@gmail.com.
Click to hear more Phi Fic.
Thanks to Christopher Nolen for our music.
Thanks to Allan Bowley for Audio and editing help.