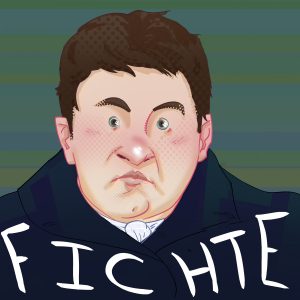 What is reality? Fichte is known as a key interpreter of Immanuel Kant who removed the idea of the "thing-in-itself," i.e. reality apart from how we interpret it, from Kant's system. Kant had described how human faculties impose structural features like space, time, number, and causality on the world of our experience, i.e. the phenomenal world, but still retained as essential to ethics and religion the idea that there is a true world behind the phenomenal that we can't know, but we can act in accordance with. Fichte thought this latter idea wasn't necessary, and the part of this popularization of his system (the more difficult work being his Wissenschaftslehre, a.k.a. The Science of Knowledge) that we read for this discussion ends in pure idealism, which means that when you know anything, you're really just being aware of a part of yourself. The work is a series of introspections, like Descartes' Meditations, but doesn't ask "what can I know?" so much as "what is my vocation?" i.e. "what am I supposed to do?" ...which in turn requires that he interrogate what he can know.

Book I, "Doubt," presents an observation of nature that points toward us as integral parts of it, with all of our actions determined in the same giant causal web that determines everything else. He finds this very distressing, so Book II, "Knowledge" reverses course and establishes (through a dialogue with an imagined "Spirit," much like in Boethius) idealism, where human freedom is recovered (if the whole causal web is my own production as ideas, then it wouldn't make sense for that web to itself determine my actions), but at the cost of everything just being empty and meaningless: just my mind playing around. We'll be covering book III in episode 272 where faith allows him to recover this meaning.

A little epistemological history: You might think like Locke that all we're really acquainted with is our own ideas, but that those ideas were caused by something out in the world. Hume introduced into this the idea that causality is really not something out in the world at all, but a pattern of expectation imposed by our minds. Still, for both of these figures, the ideas we're immediately aware presumably at least somehow represent or resemble objective things out in the world. Kant made Hume more radical by saying that it's not just causality we impose onto our imagery, but that everything that makes up a "thing" is something that our knowledge faculties introduce. What's ultimately interacting with us to produce all those ideas of things? We have no way of knowing (though we can have faith).

This notion of Kant's was labeled "transcendental idealism" because a) the world we're aware of is made up of our own ideas, and b) what makes those ideas take the shape that they do has something to do with structural features of the mind that we can't actually observe but which we can know about by reasoning about what we do observe: Those features of mind transcend what we actually experience, so any reasoning about them is called transcendental. But Kant wasn't really an idealist in the manner of Berkeley, because while for Berkeley the entire metaphysics was just made up of minds and ideas, Kant also had in his system the noumenal realm (the thing-in-itself) behind the phenomena.

Fichte's system is more like Berkeley's: We literally know only our ideas, and everything we reason about those ideas, such as that they're caused by noumena, is also made up of ideas, and though, sure, some ideas purport to refer to or represent other ideas, we never escape the realm of ideas in any sense. Causality is a pattern in our minds. A mind itself is just a complicated idea. The "I" who has the ideas is also an idea. So we can still do science, but what we're exploring is the relationship between various types of ideas. The subjective-objective distinction does not indicate a divide between mind and world but between two spheres of mind. Clearly, having an idea of "mind" like this means you're not just focusing on what people are perceiving, remembering, or imagining right now, but claiming that there's this idea-structure that exists even when no one is at that moment thinking of it. For Berkeley, this idea-structure was explicitly God's mind, and as we'll see next episode, that's essentially Fichte's strategy as well, though he has a more Kantian, i.e. practical, argument for God's existence than Berkeley's.

With this overview in mind, what insights does Fichte gain from his neo-Cartesian armchair reflections? While he first in thinking about the interlocking system of nature, a second pass (still in Book I) convinces him that actually, experience doesn't tell us either way whether we're part of the big causal machine of the world or not. This was the Kantian position, and Kant's "practical" philosophy posited that our nature as acting beings takes advantage of this ambiguity in our metaphysical position by assuming that we simply must be free. Whereas in the phenomenal world of our experience (and of science, which is a systematized extension of experience), everything always happens for causal reasons, Kant identified the ego itself as transcendental: as one of those pieces of our explanatory apparatus that has to exist for experience to make sense, but which we don't ever actually observe. There has to be something, thought Kant, that makes all of my various experiences specifically mine. Instead of (like Sartre, who specifically critiqued this) just saying this is a structural feature within experience, Kant insisted that the transcendental ego lies behind experience, into that otherwise unknown realm of the noumena. Since causality is only something we can reliably attribute to the phenomena, there's no requirement that the transcendental ego must itself have any cause, and so, due to that practical reasoning (again, that we simply can't help but think that we are really free and responsible for our actions, not simply caused by our biology), we get to conclude that freedom exists in the noumenal realm even though it can't exist in the phenomenal realm.

Fichte's theology (again, anticipating next episode, which has already been recorded as I write this) will take a similar position in that he thought that we live simultaneously as causally affected bodies in this world and as perfectly free spirits in an eternal realm, but that eternal realm is more like Plato's heaven than it is "the truth" of the world that we're living in right now, divorced from the filters of our perceptual apparatus (i.e. one of the ways that Kant's view is characterized). Fichte's position is instead more like Plato's and Spinoza's: We participate in the eternal insofar as we use our reason. But reason is not just a matter of contemplation on the model of pondering eternal truths of mathematics, but in paying attention to those aspects of our psychology specific to our status as rational animals, which Fichte identifies as moral characteristics. Whereas Nietzsche mourned detachment from our animal instincts, this is exactly what Fichte encouraged: Turn away from your base instincts and instead heed the dictates of conscience by treating others as ends-in-themselves and seek to find common ground with those others to put all of our wills ultimately in alignment under the guidance of virtue. If you do this, you'll be acting freely, because you as reasoning being will be the legislator of this law (as Kant put it). Since for Fichte, experience in itself doesn't teach us whether we're free or not, faith in your own freedom requires a leap; in this sense Fichte anticipates existentialists like Kierkegaard even as this "leap" is underwritten by practical reason a la Kant. (For another example of using practical reason to jump to a conclusion not established by theoretical reason, see Pascal's wager.)

Fichte's method of self-reflection allows him to conceive of this freedom in terms of that self-reflection: If I were an animal, I would go ahead and just follow any given urge. Because I'm human, I can stop and reflect on that urge and ask whether it's really right, whether I should really follow it. Though the dictates of conscience are always clear (or so Fichte implies in this work; he may well have a more nuanced picture of ethics elsewhere in his corpus), I can always choose to further reflect on that urge of conscience too, to ask whether it's really right or not, and then if I decide that it is, I can again ask whether my decision that it is may have in fact been caused by some subconscious, pernicious influence (my brainwashed upbringing) or is otherwise suspect. This ability to always second-guess ourselves through further acts of self-consciousness, i.e. attempts to deliberate and reason, is at once our strength, in that it's what distinguishes us from animals and constitutes our freedom, and our weakness, in that we can be forever in doubt and unable to actually will anything (Nietzsche's complaint!). On Fichte's account, what stops this reflection and so sets self-imposed limits to reasoning (making a good person merely partially examined) is faith.

Buy the translation Wes used, or get the archaic one online.