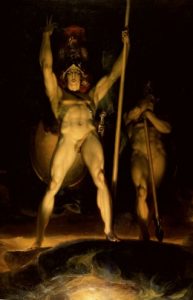 “...Farewell, happy fields,
Where joy for ever dwells! Hail, horrors! hail, Infernal world! and thou, profoundest Hell, Receive thy new possessor—one who brings
A mind not to be changed by place or time. The mind is its own place, and in itself Can make a Heaven of Hell, a Hell of Heaven.”
--Satan in Paradise Lost, Book 1

In this episode, we read Paradise Lost, John Milton's 17th century epic poem that puts a philosophical spin on the Adam and Eve tale.

The opening scene of Paradise Lost is Hell, where Satan and the other rebel angels have just fallen from Heaven.  At Satan’s instigation, the rebel angels hold a parliament where they vote to start a covert war against God on Earth, and Satan volunteers to go.  Traveling to Earth, Satan persuades the guards of Hell to let him out, traverses a realm of pure chaos, and tricks an angel guarding our universe into letting him in.  Up in Heaven, God foresees the fall of man, and Christ volunteers to redeem their eventual sin.  Back on Earth, angels find Satan in the form of a toad whispering in Eve’s ear while she sleeps, at which point he flees.  God sends another angel, Raphael, to warn Adam and Eve of Satan's coming, and Raphael also recounts the war in Heaven leading to the fall of the rebel angels.

Finally, while Eve is alone and tending to the garden of Eden, she encounters a talking serpent that convinces her to eat the forbidden fruit on the tree of knowledge.  Unbeknownst to Eve, the snake is possessed by Satan.  She then brings the fruit to Adam, who eats it as well rather than be without her.  Jesus comes down to pass judgment, and Adam and Eve are cast out of Eden.  Another angel, Michael, comes down to explain the arc of history and God's promised redemption.

What does all this have to do with philosophy?

Milton is ultimately grappling with the proper understanding of evil in human life.  Is evil somehow necessary for good to exist?  Even if evil is not necessary, how are we to disentangle it from the good?  Are the virtues united, as Plato and Aristotle thought, or can even evil people be genuinely virtuous?   Is God responsible for the fall, or is he exonerated by Adam and Eve's supposed "free will"?

What does all this have to do with Twitter?

Well, Professor Katie Kadue, Harper-Schmidt Fellow in the Society of Fellows and Assistant Collegiate Professor in the Humanities at the University of Chicago joins us and along with being the author of Domestic Georgic: Labors of Preservation from Rabelais to Milton--a fascinating book of criticism that explores metaphors of domestic labor in early modern writers and the ethics implied by those metaphors--she recently wrote a fascinating article, "Suspended Hell" in N+1, analyzing the “hellsite” Twitter.com by tying it into Milton's portrayal of hell in Paradise Lost.

Professor Kadue is one of the most exciting young literary critics working today, and it was wonderful to have a chance to talk with her. She tweets at @kukukadoo--Twitter's funniest literary account.

Cezary and Jean weren't able to join us but rest assured, they will be back for our next discussion.

Check out this incredible documentary about John Milton and Paradise Lost by Armando Iannucci, creator of the show Veep and In the Thick of It: