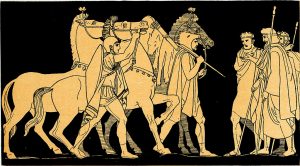 Hector also calls for a spy to go look at the what the Greeks are up too, and Dolon volunteers.

We talk about the asymmetries between the Greek mission and the Trojan mission and the image of Diomedes killing sleeping soldiers and ask what role beauty plays in this book. We also ask what the goal of war is: to kill the enemy or to defeat the enemy's war to fight?