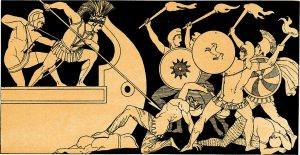 Zeus wakes up, and gives us a spoiler of the rest of the Iliad.  Then he sets his will in motion.  Apollo fills Hector with chutzpah, and he leads the Trojans to fight among the Greek ships.  In this episode, Brian, Shilo, and Jeff ask about the smile of Zeus.  Has he caught Hera in a lie?  Does his smile mean that he thinks he is superior to all the other gods?  Is it boring to be by far the greatest of the gods?