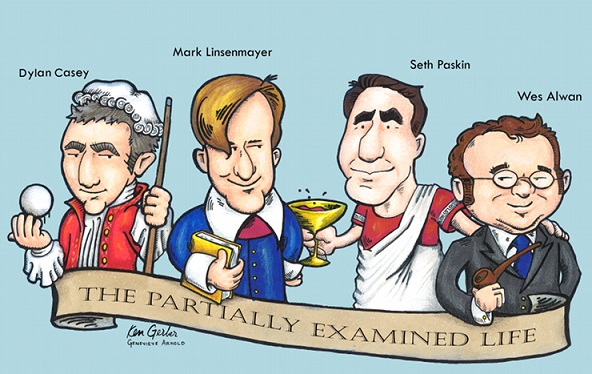 Mark Linsenmayer has lived in Madison, WI since 2000, has two kids, and works from home writing about transportation research. He's a musician who's been cranking out albums since 1992 under the name Mark Lint (listen to many tracks here and follow current doings on Facebook. When in grad school for philosophy, he mostly studied continental philosophy and philosophy of mind, with interests in phenomenology and explanations of consciousness. He also taught an ethics course for several semesters at Lakeland College.

After growing up as an Air Force brat Seth Paskin went to Reed College in Portland, OR for undergrad and UT @ Austin in 1992 for grad school. Taking a leave of absence from his dissertation he never went back and has spent many years in various roles in the technology industry. In grad school he focused on German philosophy, particularly Martin Heidegger, and spent some time looking at the intersection of Jewish and Western thought. He's a newly minted father and tired.

Wes Alwan (wes@partiallyexaminedlife.com) also co-hosts the literature and film podcast Subtext, and has a Substack newsletter at wesalwan.com. In graduate school he focused on ancient philosophy, Kant, and Nietzsche. For his undergraduate degree he attended a small "great books" school in Annapolis, Maryland called St. John's college.

Dylan Casey studied physics and political philosophy as an undergrad at Michigan State University and experimental high energy particle physics as a graduate student at the University of Rochester, working primarily on the Dzero experiment at Fermilab in Illinois. For the past ten years he's been on the faculty at St. John's College. He has abiding interests in pragmatism, field theory, and the notion of authority. He's currently on leave, living in Middleton, WI, doing research in radiation therapy delivery. He's also Mark's brother-in-law. Dylan is the newest "regular" on the 'cast, but appeared as a guest as far back as episode 13.

We include guest participants on many of our episodes, and can often rope those folks into contributing to this blog as well. To learn about any of these people, just do a search on this site to find the episode the person appeared on, which will typically link to his or her blog or other web page. If you would like to appear on the 'cast and/or contribute to the blog, you can pitch yourself to us via e-mail.