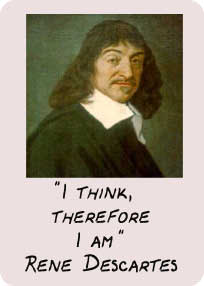 At Zero Books, we aim to be unconventional. We aim, as Tariq Goddard wrote in the founding manifesto, to be "intellectual without being academic," to be critically engaged and theoretical without being boring, and to resist the "blandly consensual culture in which we live," but it's always a challenge. At the beginning of the year, during my second month as publisher and podcaster for the imprint, I worried that I might have strayed too far from the goal. As I interviewed Frank Smecker about his book Night of the World, I found myself returning again and again to that most canonical and unsexy of philosophers, Rene Descartes. Worse, I kept returning to his famous proposition "Cogito ergo sum" or "I think, therefore I am," which is to philosophical propositions what the Mona Lisa is to paintings. That is, the argument is so well known and is so often repeated that it has nearly lost all of its meaning. And yet, I found I wanted nothing more than to discuss Descartes. At the time I consoled myself by remembering that Slavoj Zizek, the Elvis of critical theory, is some sort of Cartesian, and I justified my questions that way. Smecker's book was largely about Zizek, and Zizek was Cartesian, so it was acceptable for me to repeat the old adage "I think, therefore I am."

But then it happened again, only this time it was worse. Eugene Thacker is Zero Book's most popular author. His book, In The Dust of this Planet went viral last year, and since then he's written two new volumes for what became his Horror of Philosophy trilogy, but when I interviewed him for the podcast, all I really wanted to ask him about was Descartes. In my defense, this time it was the interviewee who started it. In fact, Thacker begins his second volume for the Horror of Philosophy trilogy, his book Starry Speculative Corpse, with an attack on Descartes' Cogito: 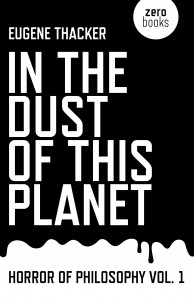 And so, in the following meditation, a foundation is provided by Descartes, in his famous formulation cogito ergo sum: '…let him deceive me as much as he wishes, he will never bring it about that I am nothing as long as I think I am something. Thus, having weighed up everything adequately, it must finally be state that this proposition "I am, I exist" is necessarily true whenever it is stated by me or conceived in my mind.' From this flows an entire legacy of philosophical thinking, in terms of Cartesian space, Cartesian dualism, and the privileging of  human consciousness over all other forms of being. But it is not so easy to shake Descartes' demon, which continues to haunt his philosophical treatise to the end.

What Thacker asserts at the start of his book is that Descartes, after positing the figure of the Evil Demon, ends up ignoring this figure, having to dismiss the implications of his own argument, if he is to maintain reason as a category. In fact, Thacker starts his second volume with a variation on an argument originally posited by Foucault in his book Madness and Civilization, an argument that I originally encountered as I did some research in order to prepare for my conversation with Smecker. I read of Foucault's anti-Cartesian argument in Zizek's essay "Cogito, Madness and Religion: Derrida, Foucault and then Lacan."

Foucault dedicated 3–4 pages to the passage in MEDITATIONS in which Descartes arrives at Cogito, ERGO SUM. [...] Foucault’s reproach is that Descartes does not really confront madness, but avoids to think it. He EXCLUDES madness from the domain of reason.

Since that interview with Thacker, and with the help of Alan Cook, I've read the full exchange between Derrida and Foucault on the subject of Descartes and madness, and I've written two essays on that debate. The first essay is here and the second is here. Continuing on, I'll just point out the obvious.

Derrida (and by extension, Zizek and Smecker) disagrees with Foucault (and by extension, Thacker) about that old chestnut "I think, therefore I am." As conventional and academic as such a debate might seem to be, there are at least three living philosophers on the Left, public intellectuals, who have written as if understanding what Descartes meant by "I think, therefore I am" matters.

Maybe we should refresh our memory on this little phrase, try to recall its significance.

You all remember that Descartes wanted to doubt everything that could be doubted, and that he wanted to do this in an effort to discover what, if anything, he would not be able to doubt. To start with, he posited a variety of reasons to doubt his senses—for instance, he suggested that you can't be sure about what you're seeing or feeling because you might be dreaming. He went further and argued that one couldn't be sure about abstract reason either. Descartes posited the idea of an Evil Demon, a creature with the power to implant illusions into your head and make you believe, for example, that one plus one equals three.

In the end, all that Descartes found that he could really be certain about was the fact of his doubt. And that's the meaning behind his proposition, "I think, therefore I am."

In the essay by Zizek that I mentioned earlier, which I read in preparation for my interview with Smecker, Zizek sided against Foucault and with Derrida and Descartes. Zizek wrote: 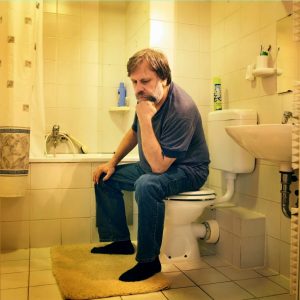 In his reading of Histoire de la folie, Derrida focused on [Foucault's] 4 pages about Descartes which, for him, provide the key to the entire book. Through a detailed analysis, he tries to demonstrate that Descartes does not EXCLUDE madness, but brings it to EXTREME. Madness is thus not excluded by Cogito: it is not that the Cogito is not mad, but Cogito is true even if I am totally mad. The extreme doubt, the hypothesis of universal madness, is not external to philosophy, but strictly internal to it.

For Zizek, Descartes doesn't deny the evil genius when he sets up the Cogito at all. Rather, Descartes infects reason with madness and doubt. For Zizek, then, the Cogito is a moment, not of clear and clean reason, but one in which madness finds itself to be real. The Cogito is, for Zizek, synonymous with the "Dark Night of the World" that Hegel made famous, a phrase that Smecker used for the title of his book. The Hegel quote that Zizek frequently deploys in order to illustrate the meaning of the Cogito is from Hegel's Jena Lectures.

The human being is this Night, this empty nothing which contains everything in its simplicity—a wealth of infinitely many representations, images, none of which occur to it directly, and none of which are not present. This [is] the Night, the interior of [human] nature, existing here—pure Self—[and] in phantasmagoric representations it is night everywhere: here a bloody head suddenly shoots up and there another white shape, only to disappear as suddenly. We see this Night when we look a human being in the eye, looking into a Night which turns terrifying. [For from his eyes] the night of the world hangs out toward us.

What this means, to my reading, is that denying the legitimacy of the Cartesian Cogito is a move toward spiritualism. It's a way to set up some sort of cognition that escapes negativity, rather to discover something untrammeled and untouched by destructive reason, a refuge from thought and the doubt that comes along with it. 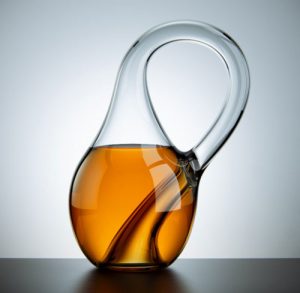 To underline this point a bit further, the Cogito on its own is not a satisfactory destination for thought. The Cogito leaves us not merely in a state of solipsism wherein we can make no claims about a world outside the self, but also self-alienated. The self that only knows itself through doubt can't claim, for instance, that it has had a consistent temporal existence, or that the set of memories that it has about itself has any validity. This Cogito can't know its body, its history, its significance. It can only know that it must exist as a mediating quality, an empty resting place for all the present experiences (true or not) that surround and penetrate it. This is why Descartes argues so unconvincingly for God's existence in his later meditations. He needs something positive, something other than the Evil Demon and his receptacle, if the world is to cohere. Descartes presents the rather unconvincing ontological argument to protect himself against the horrible implications of his own proposition. Descartes might be said to turn away in horror from the madness that he's discovered within reason.

To put a perhaps unconventional and less academic spin on all this, it seems to turn out that rather than philosophy and reason being a shield from horror and madness the truth might be the opposite. That is, the awful horrors of evil demons and madmen are, in fact, shields from the truly awful propositions of philosophy.