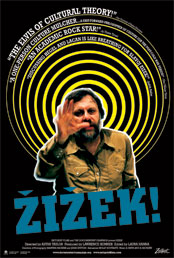 Zizek! is one of those documentaries centered around one really, really interesting person. For that reason it's more like Crumb or Bukowski - Born Into This than more famously philosophical movies like Waking Life. Zizek!'s structure is simple: The director and a small crew simply follow Slavoj Zizek as he goes about his daily business, which pretty much amounts to him walking around his apartment and traveling to lectures. It's an entertaining film about a figure of whom most philosophically minded people are aware without knowing much about him. For the people already familiar with him, don't worry, all of the "Zizek-tropes" are present: weird anecdotes, facial ticks, and self-deprecating humor, etc.

This is not an educational film. I probably know as much about Zizek's philosophy after watching this movie as before, and this is despite the fact that the director intends to be pedagogical. This is because the film's quick summaries of Zizek's work are basically just factoids, full of vague phrases that do not accomplish much illumination, like the statement that claims Lacan was considered "a return to Freud." I have no idea what this means and I feel 99 percent of the people who watch this film will feel the same. For the most part,  Zizek himself struggles to communicate anything of philosophical depth and clarity in the shortish interviews. But this is forgivable because he might be one of the most interesting people alive to observe (he communicates plenty of his salty charisma and humor though). Throughout the film I watched his face, transfixed, asking myself what many people have asked about him: is he on coke? Does he have ADD? Why does he always have phlegm in his mouth?

There is one exception to the general vagueness of the (philosophically-centric) interviews. This is the not altogether expected scene where Zizek gives a spirited description of philosophy while laying shirtless in his bed. I don't really know what the director was going for, but it ended up being the clearest exposition of thought in the film. Zizek makes clear that, to him, philosophy is a method for asking questions, not solving problems.

So as an informative documentary about philosophy, Zizek! falls a little short of what I was hoping for. Luckily it succeeds on other levels: It informs us about Zizek the person. We see him in his austere apartment, complete with a postcard of Stalin attached to the wall, and get a sense of how meticulous he is. His library contains every thing he has ever written, all neatly arranged on tidy bookshelves. When he finds a journal out of place he actually stops talking for the camera and puts it back where it should go, saying that he "must have order." We also see his son, who stares at the camera with the type of fascination kids usually have for cameras. Zizek calls it: "narcissistic interest," which made me wonder what it would be like to have him as a dad. It's somehow nice to see that he goes to McDonald's with his son.

One of the things I got from the film is that Zizek is an extremely self-aware person who is at the same time ludicrously not-so-self-aware. On one hand he's aware that people come to his lectures to hear him "make dirty jokes" and "use examples from movies" just as much as they come to hear his philosophy. On the other hand, when watching a video of Lacan, Zizek makes his trademark erratic hand-gestures while he laments how insincere Lacan's much more restrained hand-gestures are. I couldn't tell if Zizek was consciously being hypocritical, or if he thinks his own hand gestures are more authentic (faster equals more authentic, maybe). It would have been interesting if he acknowledged this, because it's always curious when Zizek turns his critical eye inwards. Case in point is perhaps the most bizarre monologue he gives in the film: He, quite sincerely it seems, talks about how he feels that he isn't human, but pretends to be.

As you can probably tell, the greatest pleasures in Zizek! are when Zizek is not being philosophical. This is at least how I felt, and it's probably a symptom of how I watch movies; i.e., I'm not really watching movies to learn anything deep (if that's even possible with this movie). I just want diversion. Luckily, Zizek is a genuinely diverting character. There are many scenes sure to make people laugh. Two stick out in my mind: one is when a woman asks Zizek for an autograph. He obliges her, she smiles gratefully and walks away. Zizek shudders, telling the director how much he hates attention from his fans. She teases him: "You must like it a little bit." Zizek replies: "No, people are evil." Another scene that will be sure to please Zizek fans is one where he gives a detailed play-by-play of how he and his son play with the toys set-up on a big table. He explains the 'rules' of his son's game with as much energy as he explains his philosophy: flailing arms, talking fast, pointing, jumping around, etc

A quote on the DVD says that Zizek is "the Elvis of cultural theory." I'd rather say he's the Andy Warhol. Just like that artist, Zizek takes pop-cultural images (from Vertigo to The Dark Knight to Kung Fu Panda) and re-interprets them for a relatively wide audience (relative to the type of attention academics usually get). Even Zizek's audience reminds me of those people who were crazy for Warhol back in the sixties; i.e., I suspect they don't know what he's talking about half the time (the movie shows us a couple of his lectures and they're respectably full, which makes the cynic in me question whether that many people could really be into an obscure philosophy that mixes Lacan and Marx with a twist of Hegel). They do know he's popular, entertaining, and seemingly profound, which are admittedly good reasons to see somebody talk. It's the reason why I watched this movie, after all.