It is when we try to grapple with another man's intimate need that we perceive how incomprehensible, wavering and misty are the beings that share with us the sight of the stars and the warmth of the sun. It is as if loneliness were a hard and absolute condition of existence; the envelope of flesh and blood on which our eyes are fixed melts before the outstretched hand, and there remains only the capricious, inconsolable and elusive spirit that no eye can follow, no hand can grasp. –Lord Jim 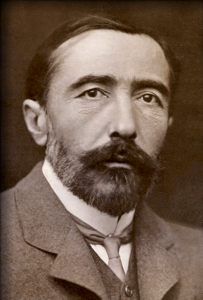 It’s within the loneliness of guilt that Jim, the titular character of this episode’s reading by Joseph Conrad, struggles.

Young Jim leaves a relatively comfortable life on land to follow his dream of a life at sea. He quickly ascends the ranks and is hired on as first mate on the Patna, a steamer set to cross the Red Sea with a “cargo” of 800 religious pilgrims, far exceeding the ship’s capacity. On one of the first nights of the voyage, the ship hits an underwater obstruction and begins taking on water. Fearing that the ship will sink, Jim urges preparation of the lifeboats for what pilgrims could be saved, but the captain and a few crewman instead quietly lower a lifeboat for themselves and abandon ship, saving only themselves. In a pivotal moment, Jim jumps into the lifeboat with the captain. Back at port, the four men are brought up before the magistrate’s council but the others flee, leaving only Jim to face the music. All four are publicly censured and lose the right to sail.

At the trial, Jim meets Captain Marlow (a recurring character in Conrad’s books, and Lord Jim’s narrator), and as they become acquainted, confesses his guilt to him. Marlow is intrigued by Jim and tries to help him recover from his fall from grace. After a few false starts, Marlow eventually helps arrange for him to find work on a remote island across the sea, as Jim desperately tries to save himself.

It is my belief no man ever understands quite his own artful dodges to escape from the grim shadow of self-knowledge. –Lord Jim

Join us as Nathan finds that Conrad seems, in this complex, nonlinear, far-reaching work, to be struggling with the soul of humanity, and Daniel notes the poignant contradiction of Jim having contempt for the captain but then following him into the lifeboat. Cezary points out that almost immediately when they’re in the boat they talk about what their story’s going to be, and Jim says he’s going to just say the truth. Laura discusses Conrad’s sharp questioning of the value of life with the decision the captain, and Jim, made of whether to save the smaller amount of people because they couldn’t save the larger amount, and Mary notes that ultimately, you’re supposed to go down with your ship.

Watch the trailer for the 1965 film starring Peter O’Toole.

Thanks to Christopher Nolen for the music.

If you have thoughts, recommendations, or questions that you want to send our way, please do via phificpodcast@gmail.com.
Hear more Phi Fic.
Check out the Phi Fic Facebook page.