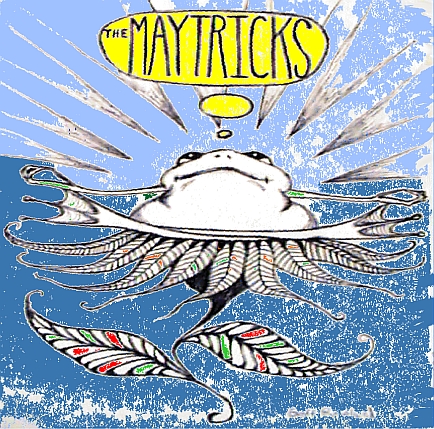 Just a bit about the song featured on our terrorism episode. You can hear "1000 Points of Light" and the rest of the MayTricks' self-titled album here.

This was off of my first full album, released when I was a senior in college, and this song was recorded the previous summer as a sort of going-away present to Matt Diaz, our rhythm guitarist for the previous year, who had graduated and was moving to New York for good. Matt sings this and wrote the lyrics with a friend of his about the Gulf War that was going on at the time (1992). It was the only tune of his that we played (most of our live playing being in a basement or attic or dorm rehearsal room), and our live version was very straight-forward: it's pretty much one chord over a bouncy rhythm going on and on.

Well, for this recording, I wrote a couple of B sections to vary up the chords, and we went all-out on the arrangement, moreso than with any other song at the time, and probably (for me) since then. Since we were using a 4-track cassette recorder, to make room for all the whistles and bells, we had to bounce the main tracks (the drums, bass rhythm guitar, lead vocal) over onto one track to free up the remaining ones, making the sound quality even worse, and then the overdubs had to be done with several things happening simultaneously (just like the Beatles did it!): I recall vividly my roommate Tim Machonkin (now a chemistry professor) playing viola while my then-girlfriend Debbie Shamoon (now a professor of Japanese studies) played tin whistle and Matt and I stamped on something to make army marching noises while Matt yelled out a la a drill Sargeant. I went through videotapes to find and overdub the battle and explosion noises (the latter being from a Donnie and Marie movie my roommate/drummer Steve owned, God knows why; I believe some bits were from "Highlander" too), and we overdubbed a heap of vocals.

While the rest of the album was re-mixed during the summer of '94, the original tape of this was too screwed up to mess with, so we just remastered our original, December '92 mix, which was originally mixed from one 4-track cassette player to another 4-track cassette player, meaning that the main tracks of this are third-generation analog, meaning that they sound like hell. Still, it's a fun song, the arrangement is wacky, it brings back good memories of the summer (1991) Matt and I lived in a smelly attic in a gross house just off the University of Michigan campus figuring out how to write and record things, and I hope you like it. The album as a whole is a monstrosity of shifting moods, colorful but poorly recorded landscapes, and emotional excess. The kind of music I think college kids should be making. You should check it out.