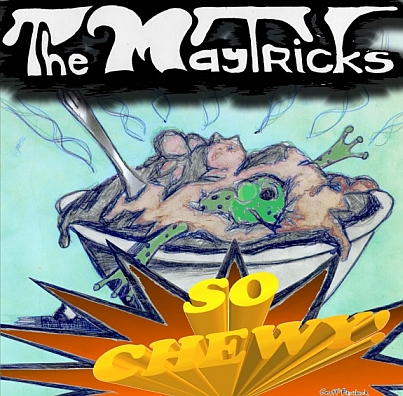 Some comments on the song featured on our Heidegger episode. You can hear "Into the World" and the rest of the second and most poppin' MayTricks album, "So Chewy" here.

The MayTricks was my college band, and our first album was released as soon as we had enough songs recorded in whatever form to make a good collection, but it's not a particularly coherent collection (which is sort of its appeal), being a mix of full-band recordings and wacky studio creations and points in between.

"So Chewy," however, represented the bulk of the live set that we'd been playing for more than two years, mostly with the same line-up. Many of the tunes were among the first we learned together in our first real college band, so although it was recorded the summer after my senior year, some of the songs were as old as high school. "Into the World" was one of Steve Petrinko's, written in his first weeks of college, and it's about exactly what it sounds like: being away from his parents house in this crazy big place. I don't know if it's just a coincidence that it sounds so much like existentialism and uses this Heideggerian language, but these were definitely among his better lyrics at the time; I particularly always laugh at the line "I seem to talk like a limbless mime; no one tends to give a damn."

Steve had listened to a lot of Led Zeppelin and other harder stuff than I was into at the time, and this tune is one of the closest to heavy metal that we got. I forget exactly how much of my bass line Steve wrote and how much I came up with, but for sure it was my idea to do it as a slap bass part (which I pretty much never do at this point), which was pretty fun and freaky for me. I also always really liked singing that bridge and last chorus with him all balls-out, and had fun recording that little backing choir that you can hear if you listen carefully toward the end. The guitar solo was one of Geoff Esty's most triumphant, and our recording all the non-soloing instruments live for this album meant that there was no bouncing between tracks on our little 4-track cassette recorder, so everything remained as close to hi-fi-sounding as our cheap microphones could allow us. I should say that Geoff was not fond of this cover art (done, as with all of our albums, by Geoff Rowland, a friend of ours), as he thought it made us look like drug-addled punk band instead of the geeky bunch of dudes that we were.

Quoting the liner notes to the album: "In the late spring of '93 the band considered the question 'Why don't I feel like running around screaming naked more often on stage?' Their subsequent shows and this album are a reflection of this challenge." Yes, the recording is all home-made, and the band was a bit pretentious, but that's what college bands are for.